39-year-old Weisz who has been engaged to film-maker Darren Aronofsky, and having a son with him, was delighted by the accolade. 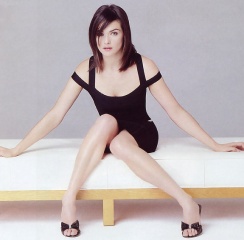 In a poll established by Esquire magazine, the English actress Rachel Weisz (The Mummy, The Constant Gardener, The Lovely Bones) has been voted by British Esquire readers as the woman most men would like to marry. The same readers voted “X Factor” judge, Cheryl Cole as the woman they’d most likely want to bed.

39-year-old Weisz who has been engaged to film-maker Darren Aronofsky, and having a son with him, was delighted by the accolade.

“Oh my God! Really? That’s so funny. I’m marriable. But I’m not married!” she said. “I was getting worried that the men didn’t like me any more.”

Weisz can be recently seen in “Agora,” a box-office smash in Europe where she plays a 4th century Greek philosopher Hypatia, where she could be up for a best actress Goya award (Spanish Oscar). She made headlines last year by produly stating that she was “fit” enough to appear in her own nude scenes without a body double. In the US front, she recently appeared in Peter Jackson’s “The Lovely Bones,” portraying a distraught mother of a girl who had been murdered.

If you’re still a fan of Weisz, expect to see her next in “Unbound Captives,” a film where she will star opposite Robert Pattinson (Twilight) and X-Men star, Hugh Jackman.