Twilight star clipped by a cab while filming in NYC, trying to escape hordes of rabid fangirls.

Twilight star and teenage heart throb Robert Pattinson was clipped by a cab while filming in New York City, trying to escape hordes of rabid fangirls.

According to RadarOnline, “the 23-year-old London-born actor had been inside most of the morning filming scenes for his new movie Remember Me. A team of five security guards were trying to fend off a crowd of teenage girls when Rob was leaving the bookstore.

“It was pouring rain as they tried to hustle him quickly across the busy street to the safety of his trailer. Some of the teen girls were hysterical and Rob rushed across the road. As he did so, a taxi grazed him. The cabbie slammed on his brakes as soon as he realized what had happened.”

Luckily Pattinson was more stunned than hurt and appeared as if the cab had hit him in the hip. A bodyguard next to him checked if he was okay and then screamed at the fans: “You see what you did, you almost killed him!” 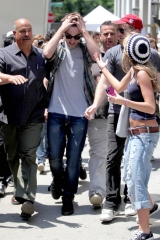