Sienna Miller Upset Over The Likeness Of Her ‘G.I. Joe’ Action Figure

“My doll is cross-eyed and has the biggest chin you have ever seen.”

Sienna Miller who stars as the sultry Baroness in the upcoming “G.I. Joe: Rise of the Cobra” — which hits theaters on August 7th — is one of the latest starlets to have an action figure made in her honor.

Despite the honor, however, the Miller has spoken out about her dismay over the action figure’s likeness.

“My doll is cross-eyed and has the biggest chin you have ever seen,” she complained of the 3″ Baroness G.I Joe figure. “She looks sort of possessed.”

Miller of course is not the first celebrity to have complained about their action figure likeness. Recently “Transformers: Revenge of the Fallen” star Shia LaBeouf complained about his Sam Witwicky figure that came bundled with Bumblebee — virtually denying that it was a plastic likeness of him. 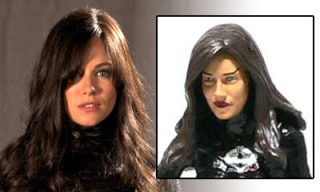