Tiger Woods Not Owned By Hydrant And Tree But By Wife?

It’s speculated that Tiger and his wife, Elin Nordegren, had a confrontation earlier in which she attacked while he retreated hasty and recklessly in his SUV. 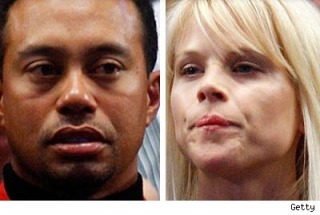 Tiger Woods was reported to have been in a car accident early Friday when his Cadillac Escalade SUV slammed into a fire hydrant and tree near his home in Windermere, Flordia.

Woods, 33, the world’s top golfer and major sports marketing star was treated at a nearby hospital with what police described as “serious injuries,” and has since been treated and released.

Investigators plan to question Woods today about the events surrounding the car accident outside the golf champion’s house. But according to TMZ, Tiger had a conversation Friday — with a non-law enforcement type — detailing the incident that lead up to his accident.

It’s believe that he and his wife, Elin Nordegren, had a confrontation about reports that he was seeing another woman. The argument escalated and she scratched Wood’s face. Tiger then hasty retreated for his SUV while Elin followed with a golf club. She struck his vehicle several times with the golf club as Tiger drove away.

It’s reported according to TMZ’s source that Tiger then became “distracted,” believing the vehicle to have been stopped and parked, and went out to survey the damage. At that point, the SUV hit a fire hydrant and then a tree.

Additionally, Tiger had said during the same conversation that he had been taking prescription pain medication for an injury, which helps explains why he seemed somewhat dazed at the scene after police arrived.

This new information is much different than what Tiger’s wife had reported early Friday when police informally questioned her. She had told officers that she was in the house when she heard the accident and “came out and broke the back window with a golf club.”

“She supposedly got him out and laid him on the ground. He was in and out of consciousness when my guys got there,” says Windermere police chief Daniel Saylor.

Alcohol has been ruled out and the accident remains under investigation. Tiger will be formally interviewed by the Florida Highway Patrol sometime this afternoon.