A crowd was immediately angry toward Tequila and she was unable to turn them around despite going topless. 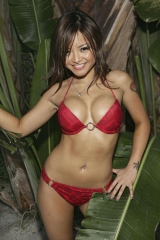 Reality TV star Tila Tequila tweeted that that audience members pelted her with stones, bottles and feces during an outdoor music festival in southern Illinois.

“The people at Juggalos behavior was disgusting and I am filing a suit against them now,” Tequila says on Twitter. “Thanks for your love.”

“I went onstage and immediately, before I even got on stage, dudes were throwing huge stone rocks in my face, beer bottles that slit my eye open, almost burnt my hair because they threw fire crackers on stage,” she says.

“Pretty soon the owners who run the Juggalos will be bankrupt. My attorney Alan is already on it. This is disgusting behavior from men. But to all of my fans, I appreciate your outpour of love and support! Xoxo”

CNN reports that the crowd of about 2,000 was immediately angry toward Tequila and she was unable to turn them around.

“She was taunting them,” an eyewitness said. “She didn’t know how to handle them. She didn’t understand the dynamic.”

Tila thought she could get them on her side by baring her breasts, but that’s when things got worse.

“She took her top off and they got really violent,” he said. “She was holding a towel to her head, blood pouring down her face.”

“She’s pretty cut up,” a performer said who saw the violence.

A mob of hundreds chased Tequila from the stage and surrounded her trailer she she sought refuge. But the mobbing continued as they rocked the trailer and smashed its windows.

Hardin County Sheriff Tom Seiner says he received a report from the 28-year-old over the phone on Sunday, but she was unable to go to the police department to have photographs taken of the injuries.

Tequila is best known for her MTV reality dating show “A Shot at Love.”

I know exactly what you’re thinking, “Oh nose! It couldn’t have had happened to a better person!” huh? poor Tila, why won’t anyone love her? I mean, she did go topless and all… Below is a video documenting part of the incident: