Moore, who’s best known as the co-creator so iconic graphic novels been generously donating 300 Christmas baskets valued at £3,000 to the needy in his hometown of Northampton, England. 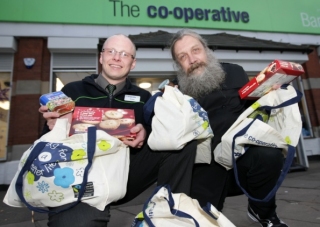 Legendary and influential comic book writer Alan Moore has been making news lately, however not for his stories but for his charity. Moore, who’s best known as the co-creator so iconic graphic novels such as “Watchmen” and “The League of Extraordinary Gentlemen” been generously donating 300 Christmas baskets valued at £3,000 to the needy in his hometown of Northampton, England.

The baskets are filled mince pies, coffee, sugar, puddings, canned food and more according to the Northampton Chronicle. In addition, the package will be made of re-usable cloth bags provided by Northampton’s own Co-op supermarket, who are also putting up 12 percent of the cost for the charitable endeavor.

Regarding his act of kindness, a humbled Moore had this to say:

“This particular issue is dear to my heart as it’s the area I grew up in and it is one of the most deprived areas in the whole country…. Those people who are living in sheltered housing and those going to the Salvation Army, who often don’t have homes, are living in very difficult circumstances and I think that any sign that they have been remembered and not forgotten is going to mean something to them.”

The charitable act is seen as an extension of his ongoing efforts to support his hometown, much like “Dodgem Logic,” a magazine he produces and headquartered in Northampton. According to Moore, “A big part of the magazine is to be able to put back into the community like this and hopefully inspire people in other parts of the country to do the same for areas like Spring Boroughs. There are lots of deprived areas like it in the country.”

People can say what they want about Moore and his eccentricism, but he’s definitely a class act.