Instead of just asking artists to create tributes to their favorite games, they asked them to illustrate their memories of the games.

Matter recently tried an interesting new art project. Instead of just asking artists to create tributes to their favorite games, they asked them to illustrate their memories of the games. The results are pretty spectacular.

Tim McDonagh
The Legend of Zelda: Ocarina of Time
There are plenty of video games I was obsessed with as a kid, but the one that stands out is Zelda: Ocarina of Time. For me, the game was about how immersive and expansive it was, exploring a world that was packed with seemingly endless depth and detail. I would say the attention to detail in that world really had an impact on me as an artist. I’m certainly a big fan of detail. I also remember going through it the first time with my two younger brothers literally watching me from start to finish. 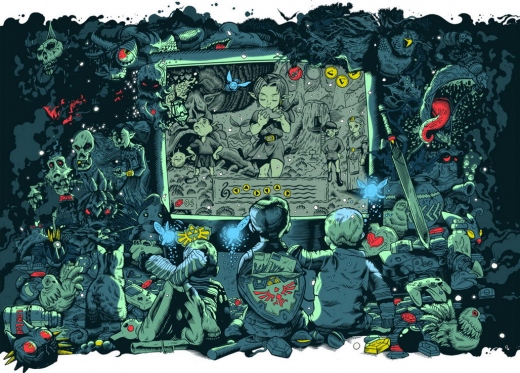 Mimi Leung
Final Fantasy 7
As a teen, I was really into the world FF7 created, and tried to track down all the concept art I could find. It was the first time I really thought about game design and the artists behind it. Obviously, this led me to the work of Tetsuya Nomura, who designed the characters, and also to Yoshitaka Amano, who this piece is kind of an homage to.

I loved the no-expense-spared, “more is more” aesthetics that pulled together all the game’s serious, big themes with a random, anything-goes kind of playfulness. One of the main characters has a gun for a hand, for example. Even with the jarring style changes between the cutscenes and the famous in-game polygonal visuals, the creators were able to form a coherent, flowing whole. 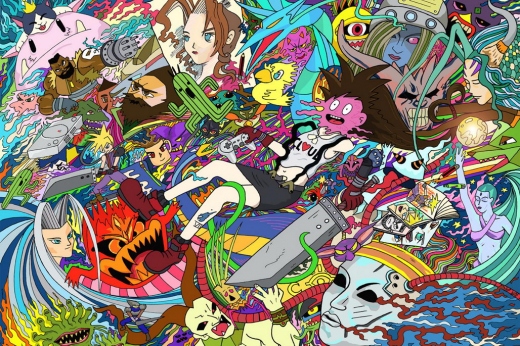 Video games are definitely a huge part of my aesthetic. I started out doing either Altered Beast or Vector Man for Sega Genesis for this, but then while sketching I remembered Rocket Knight Adventures.

The 16-bit era of my childhood was filled with robots, big swords, 1-ups, and heart-shaped lives — which makes Rocket Knight the quintessential game. I always feel five years old when I play it. It reminds me of a time when electronics didn’t just feel like the future, they felt like magic. It was a much more mysterious time for technology and electronics.

You can see from my art that I’ll always hold pixels in my heart. And even more so, I view retro tech from when I was growing up as these mysterious artifacts, and the 8- and 16-bit worlds as bizarre, magical dimensions. Games don’t try to imagine anymore. They just regurgitate what reality already looks like. 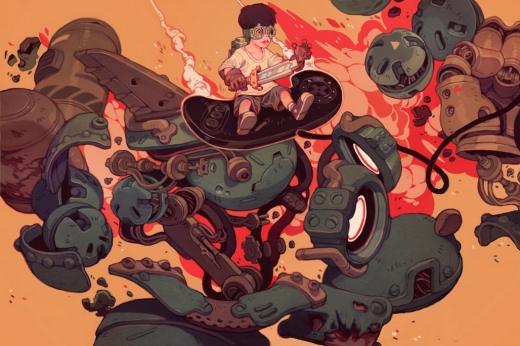 You can check out the rest HERE