Reading manga is a daily ritual to the average Otaku. If you love suspense, psychological thrillers and action coupled with skin tight scifi bodysuits and hot characters, you’ve pretty much got a winning manga that can withstand the test of time in Gantz. 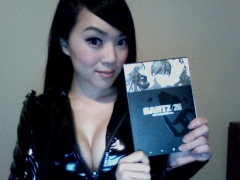 Reading manga is a daily ritual to the average Otaku. If you love suspense, psychological thrillers and action coupled with skin tight scifi bodysuits and hot characters, you’ve pretty much got a winning manga that can withstand the test of time in Gantz. Gantz has, for over a decade, given all of that and more to those who love this seinen series. The art alone is gorgeously crafted (did you know the artist used 3d models to layout every panel in the series?), with interesting characters adorned with uniquely streamlined bodysuits that look sleek, and enough gore and alien plots to kept me coming back for more! 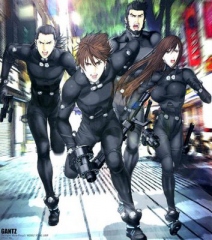 Gantz, a manga/anime series illustrated by Hiroya Oku, is about two students who die during a subway train accident while trying to save a homeless man that accidentally fell onto the train tracks. They both
literally lose their heads when hit by the train, but rather than die, Kei Kurono and Masaru Kato wake up to find themselves in a vacant apartment in Tokyo with other random people they aren’t familiar with. Sitting ominously in the middle of the room is a black sphere known as “Gantz”. The black sphere displays information on its surface, letting them know that they have to hunt an alien target. The black sphere
then opens up and they discover it contains futuristic looking bodysuits(which gives them superhuman abilities) and several racks of equipment and weapons that they are to use in their hunt. Is it a trick or is it for real?

One by one, the people in the room are “teleported” into what seems like normal everyday Tokyo — except something is wrong. No one can see them. It’s like they are in some kind of different dimension. This “game field” is a random section of Tokyo that contains their target. If they leave that area, their heads explode. If they stay, it’s kill or be killed (and be killed very gorily I might add). If they do kill or capture the alien, they get transported back to everyday life for a short time until the next game begins. To make things more interesting, if they can capture or kill the alien target, they accumulate points which, if they earn enough, can help them survive or escape the game. But only ONE person gets the points, so let the greed
and mayhem ensue. Will they escape the ominous black ball called Gantz and its deadly games? Who or what is that dismembered body inside of the sphere? Who will live through this survival horror!? O_O 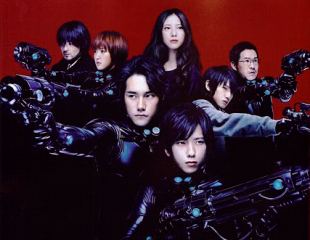 Gantz, the manga is still ongoing and published in Weekly Young Jump. Gantz is also a 26 episode anime that has been split up into two series. In addition, there is also a video game and of course the
highly anticipated live action movie that is coming out THIS JANUARY 20th(4 days before it debuts in Japan!) As excited as I am, I’m sure most of you are also wary about the transition from manga to
live-action screen. It doesn’t help that the American debut will not be subtitled but instead dubbed. However, as a fan of the series and its design, I’m there just to see how those sick bodysuits look like
IRL! Can I haz a siiick Gantz bodysuit plz?! :D

Check out the Trailer for the Live Action Gantz movie here: