Mmm Mmm! Humble Pie! Tells Me How That Tastes LeBron

I’ve never really watched a Mavs game before and I’m not a super fan. But I wanted them to win so badly because they’ve never won. And unlike LeBron, they don’t have a selfish crappy attitude. 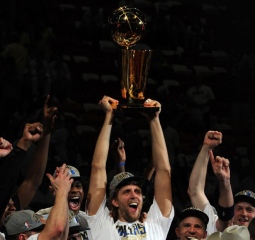 In case you guys don’t know, I’m not a huge sports fanatic. However, I apparently am very good at picking the winner of Superbowl games, boxing matches and which way I should’ve bet (PacMan vs. Mosley. I was gonna bet PacMan to win by decision…but then remembered I’m not in Vegas and don’t have a bookie. Oh well. I would’ve won so HAH!). I can now add NBA Playoffs to that list.

I don’t exactly have a favorite team. I used to like the Lakers a lot because :

1. I grew up watching them.
2. I live in Los Angeles. Hawaii doesn’t have a pro ball team so Lakers it was…

…until Shaq opened his big, fat mouth and said “Ching Chong” when he was asked how he felt about Yao Ming playing in the NBA. What the holy f***, Batman. This is the asshole who is not only a parent but a role model kids look up to and yet this is how he chooses to answer. When an apology was demanded, his sorry excuse for one was “I’m sorry you don’t have a sense of humor.”

After that, I didn’t care for the Lakers much anymore. I still enjoy watching them play but it’s just not the same for me.

Besides, the team I like changes all the time because I’m always Team Underdog. I always want the under dog to win. Always.

Now this is a team! Again, I don’t know squat about pro sports but I really liked the way they played. They’re classy (even though Mark Cuban is a crazy nut) and they play well together. They play old school and, as a bunch of veterans to the game, they have experience on their side. Add to the fact that some of them (Jason Kidd, I’m looking at you) have not won a championship despite many years of playing the game…well….can you blame me for wanting them to win?

Now the Miami Heat….ay, where do I begin? Should I start with LeSuck and his shitty attitude? Or his complete lack of sportsmanship? Maybe I should start in with how he THINKS he’s so awesome but he doesn’t have the RINGS TO BACK IT UP. Sure, he’s still pretty young in career so I’m hoping he learns a few things from the epic and massively embarrassing spanking he was dealt on Sunday. 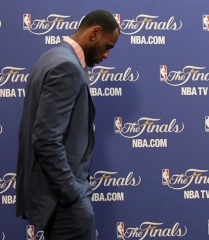 First of all, what the hell was going on at that time out? Why did what looked like the ENTIRE TEAM from Miami get up off the bench and jump into something that obviously did not concern them? Unless this is the whole pack mentality of “You mess with one of us, you mess with all of us” kicking in. If so, I’m going to point out that all it did was make them look like were a bunch of young, hot blooded foolish thugs and not the PROFESSIONAL athletes and ROLE MODELS they’re supposed to be. Come on, people. Really.

I started watching the series because I like watching Clyde transform into Tourette’s Clyde. It’s so funny because my normally mild mannered fiance is suddenly saying things like “CHOKE CITY!!!” and “OOOH!!! DAGGER!!! IN YO FACE!!”

I sat down next to him and before I knew it, he was laughing at me. This is a short list of what I was screaming (yes, screaming. Like a friggin banshee, baby) while watching Game Six on Sunday :

LeBRON!! YOU SHOULD CHANGE YOUR NAME TO LeSUCK!!

Oh, go sit down somewhere and take notes on how it’s SUPPOSED to be done by DIRK! AND KIDD! AND BAREA!!

YAAAAY!!! GO, SMURFS!!!! * the Mavs were wearing their bright blue uniforms so I thought they looked like Smurfs. *

WOW, LeSUCK!! YOU FINALLY MADE A BASKET!!! DON’T GET TOO USED TO FEELING LIKE YOU’RE AWESOME!

Good job, Wade!! Way to KICK the ball OUT OF BOUNDS!! You’re playing basketball, not soccer!!!

That’s okay! That’s okay if we missed a few free throws, babe. We don’t want the Heat to feel completely shut out. You gotta mess with their heads a bit and make them think they still have a chance to win.

My enthusiasm (and subsequent s#!t talking) made Clyde get up and close the door to our living room. You see, sound echoes pretty crazily in our courtyard and there are a lot of families with small children. There are also a lot families in my unit who go to church on Sunday. This means they’re all pretty much coming home about the same time I’m yelling all this stuff.

I’m pretty sure they wouldn’t appreciate my verbal assault on the Heat during their Sunday dinner after church.

I’ve never really watched a Mavs game before and I’m not a super fan. But I wanted them to win so badly because they’ve never won. They have so many talented players on their team who have yet to win a ring. Kidd is retiring (or so I understand). I wanted him to finally get his ring so badly….and he did!!!

I also love “Shark Tank” and Mark Cuban is one of the Sharks. Super love right there. That’s my new favorite show.

So that’s why I wanted them to win. It’s not like I had something personally against LeBron, Wade and anyone else on the team. I just think they’re too hot tempered and need the benefit only experience can bring.

However, LeBron showed off just how big of a sore loser he is during the post game conference. You know what, LeBron? You’re right. I was one of those people rooting really hard for you to lose but guess what? I woke up today happy as can be! I was accepted to a university today! Sure, I still have the same problems I had yesterday before you epically ate crow but guess what? My humiliation isn’t out there for the whole world to see and neither is my crappy attitude. Yes, you make more money than me but all the money in the world can’t buy you a championship ring. Meanwhile, I’m going back to school to better myself and my community.

You should try a big helping of GOOD SPORTSMANSHIP along with a big slice of humble pie. Tell me how that tastes.

Bonnie N. Clyde is a writer for YouBentMyWookie.com and the alias of the Supreme Commander / Ultimate Destroyer. When she isn’t hating on LeBron and rooting for the underdog, she writes in her blog using her coconut computer over at MissBonnified.com