Bite Me — ‘Twilight,’ ‘True Blood’ and ‘The Vampire Diaries’?

It’s no secret among my friends that I have always loved vampires. When I say “I’ve always loved vampires,” I don’t mean I hopped on the wagon when “Twilight” came out or when Kate Beckinsale started kicking ass in “Underworld”. I’ve loved them since I was little. In fact, one of the first dreams I can ever remember having (I was about 5 or 6 years old. I know. I was special even then and I don’t mean “short yellow bus” special) involved a vampire but that’s another story for another day.

So now it’s sexy to be in love with all things fanged and pasty white.

Who’d of thought it would ever be trendy to be so pale to the point of being able to glow in the dark like me?

All those years of futilely attempting to broil myself into some kind of a tan is OVER!!! Thank God because my skin really couldn’t take much more abuse in the sun and those self-tanning lotion things just turned me into a really weird human carrot. So not sexy.

Why am I on this topic? One of the things I really wanted to go to was the “Twilight” and “True Blood” panels. Alas, your’s truly couldn’t attend because I was running around interviewing (Tim Burton!!! Omfg… I’m going to start calling him “His Royal Stripey Sockedness”), snapping pictures, stalking the 300 dude (just kidding), drooling over Ray Park as Snake Eyes and trying not to get trampled to death. 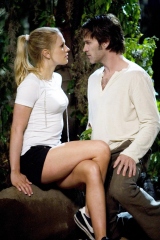 I’ve never watched “True Blood” and, up until recently, I’ve never read the book. I heard great things about it and I’m sure I’ll like it because :

1. There are vampires.
2. I love the way people talk in Louisiana. S-e-x-y. This is one of the reasons why I love Gambit and why I nearly died when I ran into him at Comic Con. * swoon *

One of the things I bought at SDCC was the book that spawned the whole HBO show, “Dead Until Dark.” I was a little skeptical about another series featuring vampires after reading the “Twilight” saga. God, it’s like everywhere you turn, there’s either another book series or TV show (can we say “The Vampire Diaries”?) featuring bloodsuckers popping up faster than you can say “nosferatu.” Seriously. Not that I’m complaining as long as they’re good.

Back to the story.

I picked up the book yesterday from the pile of stuff I got from Comic-Con… and I could not put it down. I think I finished it in about five hours. I am in love because this is like “Twilight” but all grown up! I turned red at some parts thoughtfully earmarked by my friend who had already finished it. She had stuck little flags marking the steamier sections of the book but I had no idea what they were for… but I found out eventually. No, I did not skip directly to those pages.

I hear the series is um… rather racy. I kind of wish I had cable TV now. Wait, that sounded kind of weird because it makes it sound like I’d get cable just to watch Skinemax. So not true. I swear. Really. But you know what? If I got cable and started watching the show, I think I’d be disappointed again because the characters could never look like what I imagine them to be. Oh, what to do….

Completely unrelated to “True Blood.” There’s a book called “You Suck : A Love Story” by Christopher Moore (one of my favorite authors because he’s just so damn funny) and, you guessed it, it’s about vampires. It. Is. Effing. Hilarious. It is because of this book that I have decided I, too, am going to call my future husband my Foo Dog.

So while running around SDCC, I saw all the advertisements which got me really curious about the show. The premise behind them was to make vampires seem like they stalk the Earth just like us. After thinking “Ooooh… how clever”, I started wondering “If I was a luscious, blood sucking, emo.funkdafied fiend doomed to roam the earth for all eternity unless someone staked my butt, what would I be thinking about these ads?”