New Images From ‘A Perfect Getaway’

New images from Steve Zahn and Milla Jovocich’s new film, “A Perfect Getaway” which opens in theaters this Friday. 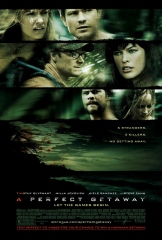 From Rogue Pictures, we received some new images from Steve Zahn and Milla Jovocich’s new film, “A Perfect Getaway,” which opens in theaters this Friday. From the TV spots that I’ve seen, this looks like the makings of a decent thriller. And I heard somewhere that it even has a surprising twist? I don’t know why anyone would ever want to announce that (ala Planet of the Apes remake). Oh well, can’t wait!

Cliff and Cydney (Steve Zahn and Milla Jovovich) are an adventurous young couple celebrating their honeymoon by backpacking to one of the most beautiful, and remote, beaches in Hawaii. Hiking the wild, secluded trails, they believe they’ve found paradise. But when the pair comes across a group of frightened hikers discussing the horrifying murder of another newlywed couple on the islands, they begin to question whether they should turn back.

Unsure whether to stay or flee, Cliff and Cydney join up with two other couples, and things begin to go terrifyingly wrong. Far from civilization or rescue, everyone begins to look like a threat and nobody knows whom to trust. Paradise becomes hell on earth as a brutal battle for survival begins.