I came, I saw and I conquered the serpentine coils known as The Line To Hall H. Now that I’ve recovered and decompressed, here’s what I thought of the insanity this year. 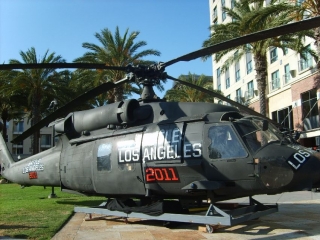 I came, I saw and I conquered the serpentine coils known as The Line To Hall H. Now that I’ve recovered and decompressed, here’s what I thought of the insanity this year.

This year was definitely different from last year. For starters, I felt like Hollywood was Cinderella at the ball when the attention should’ve been on the step sisters. Not that I’m saying comics, toys and games are ugly and unlikeable like those two sisters (SOOOOO not my intended point) so let me explain what I mean. Hollywood, like Cinderella, has extra help. Cinderella had the Fairy Godmother up her sleeve. Hollywood has HUGE vaults of money at their disposal to launch epic PR attacks in addition to legions of peons to do their bidding.

For example, did anyone notice that huge behemoth sitting on the lawn across from the convention hall? You know. The one that said “Battle : Los Angeles”? Yeah. Or how about the taco truck parked in front of the huge Scott Pilgrim display NEXT to the huge helicopter? Mm hmmm. Or what about the Green Hornet’s car chilling out in the sun with the cute girls sweltering in Green Hornette costumes?

Granted, Red Faction : Armageddon was splashed against the Otani hotel and they hosted a Mars bars eating contest but that was about it in terms of effort launched from the game sector.

Maybe they should just rename Comic Con to HollyWeird Con because that’s what it’s becoming. Don’t get me wrong. I love movies…but for something that’s called COMIC Con…I dunno….I would think the emphasis would be more on the stuff this convention is named after, you know? 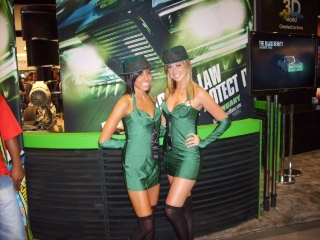 Never let it be said that the pen isn’t mightier than the sword. It is. Don’t believe me? Let me count the ways.

1. It lets you write stuff. What you write, however, is up to you. If it’s true, great! If it’s false, then be prepared to be sued by someone else who is also wielding a pen. Words have great power and gives life to ideas. An idea, as Inception has shown us, is impossible to get out of your head once it has taken root. Indeed, the pen is mighty.

It is my goal to be able to say hi, introduce myself and talk to her one of these days and I am getting closer to that goal every year. Yes, I know if I had attended the after parties, I would’ve met this goal sooner…and this is why I need to stay in downtown next year. Anyway, there’s a story and a point to all this.

A little history behind this epic mission in order. I have a great friend in the military (which means he is a hero in my eyes) who is in love with Olivia Munn. After his girlfriend, he thinks the world should next revolve around Ms. Munn. He takes the term “fan boy” to near cult levels. So Olivia is a name I was familiar with because I know her as the girl in the video store music video and one of the G4 people….but that was it.

My friend who I shall now call Frippy had but one request for me last year when I went to my first Comic Con as a virgin. 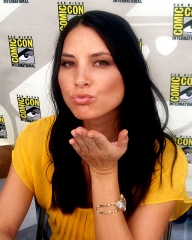 ”Bonnie, please take a picture of Olivia for me. I love her almost as much as I love EpicGirlfriend and if you can get her to autograph it, I will be the happiest man ever.”

Now how am I gonna deny a hero that request? So I stood in line for 3 hours last year in my geisha gear only to find out :

1. I was the last person they were gonna let see her. (SCORE!!!!!)
2. I couldn’t see her because I needed to have a ticket. (WTF???!!!!)
3. I could only get a ticket if I stood in another line at the ass crack of dawn that morning when they were giving it out. (I was seeing red at this point. Bonnie smash!!)

I decided against mighty morphing into my best impersonation of the the Hulk but no way was I gonna leave it just like that. Not when I’ve come so far and spent over 3 hours of my life standing in a freaking line. So I did what any other self respecting ninja would do (my 1/4 Japanese side was totally coming through. Wearing the geisha outfit added +100 in authenticity but probably contributed -1,000,000 in subtlety). I snuck behind the beef cake security guards and snapped photos on my BlackBerry.

I emailed him the photos and he was so happy. When he found out I was going to SDCC again this year, he upped his game a bit. He went so far as to say that I remind him a lot of Ms. Munn. He thinks our personalities are similar based upon what he’s seen of her on AOTS which means we would totally get along and he thinks we’re both lovely. If he could have a photo of the both of us, he would be such a happy man. 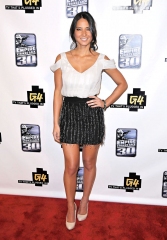 By now, my head has blown up into out of control proportions and I was determined to get closer to her this year. Amazing what a little flattery can do. Jeezus.

I knew better to stand in stupid long ass lines this year so I attended the AOTS panel in the Hilton Indigo Ballroom. While I didn’t get a good picture of her (or even one of us together….althooouuugggh I coooouuld photo shop myself into the one I took), I can see what he means when he says we’re similar.

She likes to drop F-bombs. I have to rein in my potty mouth at work because I gotta be professional.

She’s down to do crazy stunts on the show. I do crazy stuff to people at work on the daily.

She beat up Blythe in one of the shows. It only looks like I’m wrestling and beating up my patients but I’m really not because it’s all in the name of healing.

She dresses up in awesome costumes. My pediatric patients used to ask me if I was a ninja because of what I have to wear at work.

She is the beautiful product of mixed ethnicities (she’s Hapa). I’m mixed Asian.

She has the HTC Evo. I HAVE THE HTC EVO!

Dude. We are totally similar. Next year….next year, the goal is to get an epic picture with Olivia.

Olivia Munn, if you’re reading this, I hope you can clear out a few minutes for me next year.

That would be so awesome. Frippy would be floored in Kuwait….and I’d be his favorite person in the entire world after EpicGirlfriend and Olivia Munn. Sweet.

Bonnie N. Clyde is a writer for YouBentMyWookie.com and the alias of the Supreme Commander / Ultimate Destroyer. When she isn’t inadvertently stalking Olivia Munn for her friend, she writes in her blog over at MissBonnified.com.