I found myself asking “How do I top off last year’s debauchery?” and the answer was simple. I can’t. 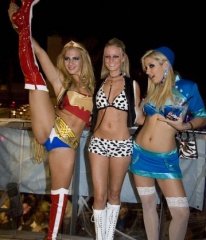 Last year’s Halloween festivities was more of an exercise in absolute excess. How befitting we were in Vegas, the City of Sin, for not only Halloween but to celebrate a bunch of us turning the Dirty Thirty. As the cherry on top, we partied the night away in two cabanas at the club aptly named XS. I still haven’t recovered the small chunk of my liver that most likely has been lost in Vegas for all eternity.

The year before that was also spent in Vegas as my beloved cousin turned 30. That was pretty interesting as my other sister became possessed by the spirit of Alice In Wonderland. With a slightly maniacal gleam in her eye, she would demand of every stranger she encountered if they’ve seen the “White Wabbit”. She was also the unofficial herder of cowboys where I became the guardian angel of a herd of cows and the secret stalker of the Ghost Busters.

Whether it was terrorizing San Diego’s Gas Lamp district for the Monster Bash, Los Angeles for Monster Massive, random clubs in Honolulu or Vegas for Halloween partying at its best, two things were always present. Skimpy costumes in which I would most likely be arrested for indecent exposure if I bent over to pick up my drink and never-ending rivers of top shelf liquor.

If you’re wondering why even the most conservative females suddenly go ape crazy and turn into the Happy Halloween Hooker right before your very eyes, I say “Dude. When else is it socially accepted and expected to dress up as skanky as can be WITHOUT cops chasing you down and booking you for solicitation? And if you’re a guy, why are you complaining?” Every girl needs to freely unfurl and fly with pride her Freak Flag and every man needs to be able to be a super hero (or villain) for just one night in public without facing ridicule.

Last year’s festivities has been the cherry on top of all my previous Halloween adventures. Therefore, I found myself asking “How do I top off last year’s debauchery?” and the answer was simple. I can’t. Therefore, I busted a complete 180 and went to a house party. Where there were kids. Very small kids. Oh yeah.

I laid the spirit of my personal Happy Whore-O-Ween Hooker to rest for the year. This was achieved by frantically searching for a costume that would cover as much skin as possible. This was a monumental first.

You see, we were going to the house of Clyde’s good friend. Many people had been invited and when I saw the Evite, I noticed there was a strange new category that counted how many children would be present. This means I have to dress appropriately for the kids.

In the end, I threw on a velvet cape I had languishing in my closet, a black dress, the most insane pair of feathered fake eyelashes (that’s right. They had feathers) and super red lipstick. I was a Succubus like Morrigan of Dark Stalker infamy but nowhere near as uh….revealing.

Know what else was a monumental first? I CARVED MY FIRST PUMPKIN!! That’s right. I hacked and sawed my way to not-so-scary awesomeness with Madonna’s “Like A Virgin” playing in my head. I tried to carve my interpretation of what Hello Kitty would look like after she was bitten by a zombie but that drawing came out absolutely retarded. I scratched that one for a cute skull. I have to say that came out pretty well even though the face fell out because I didn’t know you were supposed to carve the outline of the face and not just the face itself. So fail.

After that first semi success, I was a woman possessed! I must carve another pumpkin!!! I had tasted the blood and guts of the pumpkin and now there was no turning back. I gleefully lobotomized my next victim and tore out its innards. I happily scraped out every last bit of guts it had while cackling “MMMM!!! GUTS!!!!”

Clyde had to keep saying “Baby….watch out…..don’t cut yourself…” He was probably worried because I was sawing away in a rabid frenzy. I’m surprised I wasn’t foaming at the mouth. I was in a zone, man. My artistic awesomeness was flowing directly from brain to hand to knife to pumpkin flesh.

Alas, my second pumpkin would prove to be my last of the night. My right hacking arm was sore. I thought I got worked out from my Pilates session the day before but man….I was so wrong. Carving pumpkins is waaaaay harder on the muscles.

So. The epic question of the season is “Did you have a good time considering this is nothing like what you’ve done in the past or what you’re used to?” You know what? I did. It was nice to just chill out and not be faded to the point where I can’t remember where my cabana is. My liver really needed it and I was happy to oblige. Now that I’ve recovered, I’m going to wait and see what next year brings.

Bonnie N. Clyde is a writer for YouBentMyWookie.com and the alias of the Supreme Commander / Ultimate Destroyer. She’s not afraid to fly her freak flag and for that you should check out her musings and rants over at MissBonnified.com.