One geek’s opinion about why “The Hunger Games” is everything “Twilight” is not. 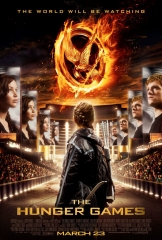 I was a closet Twihard (sssh…..don’t tell nobody….). A group of us at work were really obsessed to the point where we actually wore homemade charm bracelets that Fats (hey, that’s what she really wants us to call her. The irony? She’s one of the skinniest people I know) made. Remember the one Jacob made for Bella? Yup. That’s what we wore.

While I like the Twilight series, it didn’t have a chance against “The Hunger Games” series. “Twilight” was great as a book. I couldn’t watch it as a movie. Come on. Edward is played by the same guy who played Cedric Diggory in the Harry Potter series. Sorry. I just can’t take you seriously as the world’s hottest vampire after you played Cedric-frigging-Diggory.

That is why I never watched a single “Twilight” movie. But the movie “The Hunger Games”? I was all over that one.

In case you have been stuck in a place like District 12 with limited television and/or electricity, here’s a brief rundown of “The Hunger Games” movie from IMDb:

Set in a future where the Capitol selects a boy and girl from the twelve districts to fight to the death on live television, Katniss Everdeen volunteers to take her younger sister’s place for the latest match.

I’m not saying Bella is a helpless little bitch. She’s not. She can hold her own but the feeling I got from reading the series over and over again is that she’s clumsy as hell and needs to be rescued and/or protected. On her own, she’s not very good at anything besides tempting every vampire within a 5 mile radius to turn her into dinner. 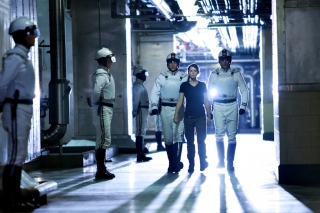 Once she’s turned by Edward, THEN and only then was she a major force to be reckoned with.

Katniss, on the other hand, doesn’t need or want anyone’s help. She’s a badass on her own. She’s strong and knows she can hold her own but she also knows when she needs help to be even stronger.

When you read the “Twilight” books, you don’t really get a good sense of what Bella looks like. Her description is pretty vague. At one point, I started putting my face on her body when reading the book because all I knew of her was that she has brown hair and brown eyes. SO DO I!! Sweet. I could be Bella.

While there isn’t an entire chapter describing Katniss’s appearance, you get a pretty good idea of what she looks like and she doesn’t look like me. She’s exotic…and I think Jennifer Lawrence was a great pick. She’s gorgeous and yet she’s like the girl next door. Exactly what I pictured Katniss to be.

True To The Book

For the most part, the movie was true to the book. The only parts that I found that deviated from the book are as follows :

1. There were no Avox.
2. Gale didn’t have dark hair, olive skin and grey eyes. Who cares? Liam Hemsworth was a nice piece of eye candy.
3. Peeta didn’t lose his leg due to Katniss tourniquetting his leg.
4. The muttations didn’t have the facial features of the fallen Tributes.
5. We didn’t see Katniss go apeshit crazy like she did in the book when Peeta had to be taken in for emergency surgery.
6. We didn’t see Katniss recuperating from the Games.
7. President Snow didn’t twist the crown into two pieces.
8. The movie ended with the crowning. The book didn’t.

Oh yeah. We were introduced to Haymitch very differently in the book versus movie.

All in all, in terms of following the book, I’d say this movie did a really good job. They brought to life pretty much how I had envisioned the book. I very, very rarely watch movies that are based on books. I am disappointed 99% of the time and wish I never wasted my time and money on the movie. I’m very happy that this movie falls into the rare 1%.

There’s been some….conversation….about how this movie was cast. But here’s the thing: I thought they did a great job!

There’s no way anybody besides Stanley Tucci could’ve played the nutty but lovable Caesar Flickerman. As Clyde and I were leaving the theater, I heard the voice of a young fangirl screaming “YEAH!!! STANLEY!!!!!!” as the credits rolled. I’m with her.

I already talked about how I feel about how they cast Katniss and Gale. I can’t say I was immediately smitten with Josh Hutcherson as my beloved Peeta but I can say he grew on me. By the end of the movie, I can’t imagine who else I could’ve picked to play Peeta. He did a good job. My heart cried when he was sick and I saw Katniss tend to him. God…..he did a great job….there must’ve been so many girls the world over sighing and thinking “PEEETTTAAAAA!!! I’LL TAKE CARE OF YOOOOUUUUU!!!”

Now we move on to Rue, Thresh and Cinna.

I personally don’t get it. The book describes Rue and Thresh with dark hair, dark eyes and dark skin. What is the problem? I thought Amandla Stenberg and Dayo Okeniyi were awesome. Amandla really looks like a delicate little bird. Dayo looks like a human tank. They both fit the book’s description AND they played the characters very well. What’s the problem?

Cinna is the coolest supporting character in this storyline. Lenny Kravitz is cooler than my favorite popsicle not only on stage but in real life. I know because I once beat him in a game of 8 ball in Hollywood. He also smells good.

Uh….where was I? Oh yeah. Lenny Kravitz as Cinna. You know, the only person besides Lenny I can think of who can fill the crazy, sexy, cool shoes of Cinna would be The Artist Formerly Known As Prince. These two are true artists. Who knows? Maybe the character of Cinna was based upon these two guys. They’re sexy. They’re 120% male and masculine but they aren’t afraid to show their softer side. They love women. Did I mention they’re sexy?

So again, I ask. What’s wrong with Lenny, Amandla and Dayo playing the characters of Cinna (I’m so in love with Cinna), Rue and Thresh?

If you’re asking me, I would say “NOTHING”. They did a great job. I cried when Rue died. Thresh was scary. I actually felt just a tiny bit bad for Clove when he bashed her head in. That looked like it sucked.

I can’t wait for “Catching Fire”.

Bonnie N. Clyde is a writer for YouBentMyWookie.com and the alias of the Supreme Commander / Ultimate Destroyer. When she isn’t participating in The Hunger Games, she writes in her blog over at MissBonnified.com