MissBonnified apparently really liked the first episode of “Undercover Boss” and throwing around phrases like “it sucked major donkey balls.” 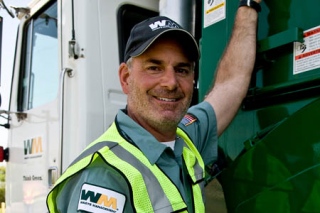 I haven’t watched a whole lot of TV since this thing known as moving has more or less consumed every waking moment when I’m not at work. I swear moving is the infected canker sore temporarily marring my otherwise glorious life. Luckily, like the thankfully purely rhetorical canker sore, this is only temporary. I’m thanking all the stars in Heaven right now.

Anyway, I have no idea what the hell is on TV anymore thanks to frantically trying to get myself settled into my new home. So Clyde and I are watching the Super Bowl (WOO HOO, SAINTS!!!) when I keep noticing trailers for this show called “Undercover Boss”. I’m all about spying and espionage so naturally I wanted to watch it.

I have to say I really enjoyed the first episode. It was the one about the president and COO of Waste Management, Larry O’Donnell, who gets all ninja and infiltrates his own company to see what really makes it tick. I dunno about you but I thought it was hilarious that they chose a company that deals with poop, crap and other junk to be their first aired episode. That’s awesome. What’s even more hilarious is their choice of a second episode – Hooters. Ooooh, boy. More on this later.

So here’s what I think about the show.

Initially, I was wondering if this show was for real because, c’mon, a real president getting down and dirty like the employees do in a company that deals with all sorts of waste products? I didn’t think it was very likely UNTIL I saw him trying (and epically failing) at picking up random papers on some God forbidden hill in the middle of Nowhere.

Or what about the part where he actually cleaned and sucked out the contents of the cesspools known as Port-A-Potties??!! Omfg, I thought I was going to throw up the slices of the $10 pizza deal from Pizza Hut that Clyde had ordered. 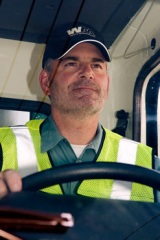 Not the pizza because that was delicious. I’m talking about watching someone swirl the sludge in those toilets around in order to properly vacuum it all up. Ugh. Ack!! * barf *

And yet, it was strangely satisfying to see a COO / President get down like that. I was very impressed.

Things That Made Me Go Hmmm….

I had to wonder if some of the jobs he did were staged. I don’t think the paper picking one was fake nor do I think the conveyor belt one was either. But the Battle Of The Portable Toilets? Hm….I dunno about that one. It makes me go “hmm…” because I wonder if they didn’t just add that for shock factor. Seriously….

2. You Get What You Deserve

It was so nice to see the people who worked so hard get rewarded at the end of the show. On the other hand, I derived an odd sense of comfort in seeing him warn a manager by saying he didn’t like the way he ran the office.

Whoever picked these particular employees to be on this show did a great job because they put the company in a really good light. They’re hardworking and for the most part, it shows why they like their job. I was humbled by this show. These people reminded me to be grateful for everything that I have because some of these employees aren’t blessed with the things that I am and yet they remain positive and happy with that they do have.

I’m willing to bet that was probably a trade-off in having their company aired on national television because, seriously, who the hell in their right or left mind would be up for showcasing their most disgruntled workers for the nation to see? It was also gratifying to see the Larry come face to face with the results of his decisions in the cushy boardroom. If anything, that was the most satisfying aspect of this show because he got to see how his actions impact the ones who make his company run smoothly. 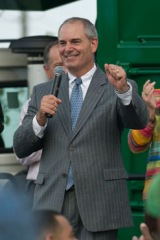 Things That Made Me Go Hm…

Why DIDN’T they pick some of the more disgruntled ones? I mean, wouldn’t that be a more realistic representation of a company? You could run the most epic company in the friggin’ world but I’m willing to bet a few hard earned dolla dolla bills on the existence of at least ONE. I think it would’ve been interesting to see the head honcho of some crazy corporation interact with that person and really hear it from someone who doesn’t appear to think their position is the best thing since sliced bread.

I think they really missed a good opportunity by not doing that. Come on. It’s the largest WASTE MANAGEMENT company in the country. It would’ve been really eye opening for the president to really hear what his employees AND customers think of his company. Then again, I can understand why they wouldn’t want to air such things on TV.

I also have to wonder if some of their employees either didn’t figure it out or weren’t in on it from the very beginning. Case in point, Jaclyn. I think she’s freaking awesome for handling her business not only on her job but also at home. However, the cynic in me is scratching my head because it just fits too perfectly.

She invites a “complete stranger” in her home to have dinner with her lovely family and, oh hey, it just so happens that she tells A COMPLETE STRANGER her financial woes after showing him how she more or less runs the entire show all by herself.

Really? REALLY?! And then Larry (the COO / President of Waste Management) goes on a video log and gets all emo’d out by saying that he can’t sleep because he’s thinking about her predicament?! AND THEN SHE NOT ONLY GETS ASSISTANTS BUT HE GIVES HER A BETTER POSITION IN THE COMPANY?!!!

Wow, I bet her immediate supervisor is probably kicking himself in the gonads because she got promoted and he’s stuck with two newbs who’s gonna take over her old job. Poor guy.

All in all, I still enjoyed the show. I really like the employees I’m pretty sure were hand picked for the episode. If it weren’t for the fact that I have an awesome boyfriend who is taking me to dinner at a location he refuses to tell me, I’d watch the second episode which showcases Hooters.

God, what I wouldn’t have given to see the guy (yes, that’s right. A man runs the Hooters empire. Why, oh why, am I not surprised?) at the head of the company put on those hideous orange hot pants and wait tables. THAT would’ve been awesome beyond all that is awesome.

Bonnie N. Clyde is a writer for YouBentMyWookie.com and the alias of the Supreme Commander / Ultimate Destroyer. She writes a lot in her blog over at MissBonnified.com and use to watch a lot of TV alone before crying herself to sleep. Now, not anymore!