I Go Berserk For Anime

Reading fantasy manga is one of my favorite things to do, but when a manga turns into an anime series or an animated movie, I get insanely stoked!

Reading fantasy manga is one of my favorite things to do, but when a manga turns into an anime series or an animated movie, I get insanely stoked! Reading manga frame by frame is immensely enjoyable as it is, and having it come to life with voice actors that depict their likeliness is just awesome. This week I wrote down my top must watch fantasy manga turned anime. In my opinion you can’t lose with these, and they are surely not cream puff lame and full of cheese! they all contain huge swords, demons, insane plot, and exciting characters, no unneeded filler. One for the girls, and one for the guys, or for the anime/manga lover, two awesome series!

The main character Gatsu is a complex spiral of sword yielding destruction. He does everything with his sword, by his sword, and he’s pretty much obsessed with killing with his sword. The medieval dark fantasy theme is highly apparent in this manga/anime and intertwines a man’s love for killing with the test of friendship, love, and fighting Godly demons that come his way. The action scenes are blatantly intense and incredibly violent; Berserk is not for the faint at heart. The humor is cleverly dosed, the pace is fast, the story progresses and is never monotonous. The story is philosophical, deep and innovative with many chapters to leave you questioning what could happen next. Definitely not boring, and full of rawness. One of my top favorites for sure. 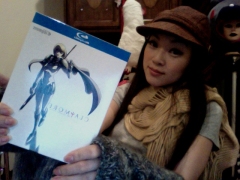 If you’re looking for cutesy girls who do nothing but act lost and retarded, this is not the manga for you. This manga/anime is one of my hands down most favorite ever made. The women in this manga are strong, beautiful, with waif like bodies, in silver armor are known as Claymores. They are half monster half human that are ordered to protect humans against Yoma, which are fully grown monsters which they call “Awakened beings”. The main character is Clair who is a young woman that goes through hardships and lessons. She learns through experience to become an insane fighter with a brave heart stronger than the blade she holds. A must read/watch for any lover of great story, plot, art, and enormous attention to detail. a great manga for girls who are depicted in a strong light. Plus they are hot and they massacre monsters with no mercy :D

Both of these manga/animes are beautifully drawn, intense plots, and strike each reader with excitement at each turn. I can’t say which is better because in a lot of ways they are both similar, and both worthy
to read/watch all the way through. Warning, lamers need not apply :D

In light of this, I recently came out with a shoot that had a lot of inspiration from dark fantasy styled anime :) Enjoy 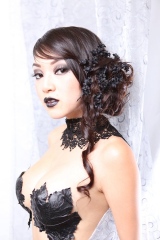 2 thoughts on “I Go Berserk For Anime”