Growing Up As A Colorguard Ass Kicking Ninja Turtle

Learning how to use a bo ensured that no one ever dared to pick on me when I was Colorguard in high school. What they didn’t know was I’d be hearing the Mortak Kombat theme song playing at the same time I was spinning that flag around and aiming for soft body parts. 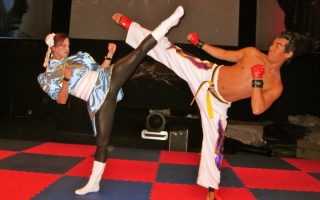 I just watched the clip of Chloe Bruce kicking some ass as Chun Li. I am now kind of sad I didn’t stick with martial arts. Yes, I was enrolled in karate classes when I was younger. Bite me.

I ended up quitting before the assistant sensei of the second dojo I joined (who happened to be a friend) was going to bump me up to brown belt. You’re probably asking yourself why I quit if I was thisclose to possibly having to register myself as a deadly weapon? The answer’s kind of retarded. My interests at that point were more in line with hitting up the local pool halls and getting into games in which the boys assumed I didn’t know the business end of a cue stick from the other. Silly boys.

So why did I get into karate in the first place? My little brother wanted to be a Teenage Mutant Ninja Turtle. He was obsessed with them when he was little. I think my mom probably thought teaching him self defense wasn’t a bad idea either. Somehow, somewhere for some reason, my sister and I were enrolled also. Then the fun began.

My sister was really good at kata, or forms. That’s what Chloe Bruce is good at. My brother was good at looking cute in his gi. Me? I excelled in sparring and in weapons. I’m not sure why I was good at that. Maybe I had a lot of pent up aggression back then and reveled in the idea of a semi free-for-all ass whupping time. I didn’t care if I got my ass beat or if I beat the crap out of someone else. What didn’t knock me down only made me better.

Weapons were fun too. My favorites were the sai (Raphael’s weapon of choice) and the bo (Donatello’s delivery system of doom). I liked the sai because that sucker looked absolutely evil and was very versatile. You could use it as a stabbing weapon or flip it around and now you can use the blunt end to deal some serious damage. The prongs could be used to hook into your opponent’s hands and cause some trauma. However, when the hell would you ever find a wicked set of oversized forks just lying around when you need it? Not to mention they have to fit your hands and arm. 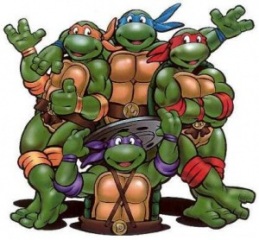 The bo, on the other hand, is much more practical. It’s a long slender piece of wood (that’s what she said! Haa haa haa!). I liked the heft of it when I was twirling it around and laying the smackdown on some imaginary baddies. The odds of finding a branch to whirl around is much higher than finding something that resembles a sai. I am a little sad I never got to learn how to wield katana, whips and nunchaku. Oh well.

Mastering the kata is supposed to show how much discipline, mental clarity and focus you have. Or something. Maybe this is why I wasn’t very good at it back then. I was kind of all over the place. Perhaps this was why sparring sucked me in to its violent embrace and found me a willing student. When I was in the ring with my knuckle guards on, I felt super focused. There was only one objective – knock the other girl out before she takes me out. The fluidity, unexpected attacks, reading my opponent and adapting to the constantly changing situation appealed to me much more than pretending to fight a bunch of bad guys in very structured, choreographed moves. I figured sparring is a lot more practical and useful whereas practicing my form was just to look cool….or something.

My most memorable sparring match has to be the first one I ever competed in. It was my first competition ever and to say I was nervous is a total understatement. I was about to throw up…and that’s before I saw who they had matched me up against.

They had me, a complete n00b white belt, going up against a seasoned brown belt as my second round and then a BLACK BELT for my third and last round. Wtf. How is this even fair?! What the f*ck were these people thinking?

I asked them if there was a mistake and they gleefully told me no, there was no mistake. Apparently, my sensei at the time felt like I had the raw talent to go far in the competition circuit. Luckily, I had a blue belt (3 – 4 levels above my beginner’s ass) as my first round. 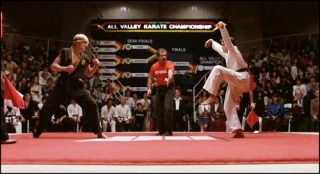 BlueBeltChickadee didn’t last long. I won. I was still freaking out but my nerves were settling down pretty nicely after the adrenaline kicked in. Maybe this was the “killer instinct” people keep talking about. I didn’t know. I just knew I won and that felt good even though it hurt where her kicks landed.

I get in the ring again and then it was like all the nervousness disappeared the minute BrownBeltGirl and I bumped knuckle guards. I have no idea what happened next but I beat her pretty good. I remember one round house kick sent her flying.

This isn’t to say she didn’t give me some of the hurt back. One punch landed squarely on my ribs and I couldn’t breathe for a few seconds.

I won that round. We bowed and she limped off. I held my ribs together and prayed I would get a break before the next round but it wasn’t meant to be. The round with BlackBeltChick was starting now.

I’m not going to say I could’ve won that round if I was uninjured. Looking back, she would’ve kicked my ass even if I had been whole and intact. She’s a black belt AND she was good. I’m a white belt who just started karate a few weeks ago. I was just happy I scored some points on her.

When it was time to receive the medals for our division, I felt pretty odd. BlackBeltChick got gold, BrownBeltGirl got bronze and I, WhiteBeltN00b, got silver.

I remember wanting to compete in the circuits like Sensei had envisioned me. He told me I had the raw talent but I had to work on my forms more. I saw the other kids in the dojo perform choreographed group kata to the Mortal Kombat theme (this is when the game was HUGE in the arcades and when the movie was about to come out. Yup, that’s how long ago this is) and thinking to myself “That’s gonna be me up there with my name embroidered in gold on MY black belt”.

This never happened. I’m pretty sure I’ll never do karate again and I don’t envision myself competing anymore. You know who I remind myself of now? Jet Li’s character in “Fearless”. I’m older now and much more chill. If I were to ever get back into martial arts, I’d go into something like Ba Gua (hello to all you Avatar fiends) or maybe Wing Chun.

Watching this video instantly transports me back to those days of practices and competitions. I miss my sai. I miss my bo. Learning how to use a bo ensured that no one ever dared to pick on me when I was Colorguard in high school. What they didn’t know was I’d be hearing the Mortak Kombat theme song playing at the same time I was spinning that flag around and aiming for soft body parts. I’m pretty sure that wasn’t what Sensei had in mind when he spent extra time after class teaching me how to better handle that weapon but we’re just going to conveniently not tell him, mmkay? Alrighty then.

Bonnie N. Clyde is a writer for YouBentMyWookie.com and the alias of the Supreme Commander / Ultimate Destroyer. When she’s avoiding getting her legs swept by Johnny or getting stabby with her sais she writes in her blog over at MissBonnified.com.