Last night Capcom threw one monumental launch party for the much anticipated Marvel vs Capcom 3: Fate of Two Worlds in San Francisco! 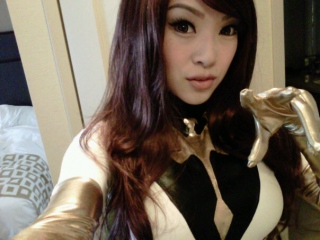 Hey what’s up everyone! Last night Capcom threw one pretty monumental launch party for the much anticipated Marvel vs Capcom 3: Fate of Two Worlds (MVC3) at The Mezzanine in San Francisco. Tons of fans waited eagerly in line for hours for admission as the line stretched out for several blocks!

The event was packed with true hip hop heads and obsessed fans of Capcom and Marvel alike from Hieroglyphics, David Banner, DJ Qbert and a special guest that no one saw coming later in the night! The event kicked off with a set from DJ Qbert that got everyone hyped! David Banner and the Hieroglyphics kept everyone going mad insane. At the end of the night, the special mystery guest ended up being none other than Ghostface Killah from Wu Tang clan! People were officially going berserk, myself included! Honestly, I did not see it coming!

The atmosphere was amazing. Blaring backgrounds of MVC3 players were all around kicking each others asses on screens. It was EPIC to say the least! I couldn’t help but watch everyone select their three characters and noticing a complete unison of complimenting characters each from each side. It wouldn’t properly be Marvel verses Capcom if that didn’t happen, but it did, officially stamping this event as a true MVC3 party! 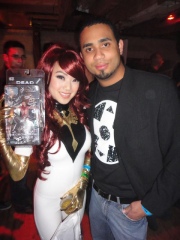 Fans who attended were able to take pictures with some amazing cosplayers as well as mingling with game industry gurus. A surefire scene of video game and comic book Otakus! I was lucky to meet up with Warren Price who is part of the Dead Space 2 team, and as flabbergasted as I was, I even got a surprise from the Dead Space team that was so badass I couldn’t wait to hang it up in my room. It was a Necromorph Slasher figure with the entire team’s signatures. I can’t even begin to tell you enough how stoked I was, and humbled to say the least.

Another highlight of the night was getting to see MVC3 producer Ryota Niitsuma and Capcom translator Miquel Corti amongst the crowds taking pictures and greeting fans. Humble and funny, Niitsuma San definitely knows how to party, and balance that with smiles and interaction that keeps everyone gracious for such an awesome MVC3 producer. I had the honor to talk along side the most awesome Niitsuma San and Capcom Translator Miquel Corti during a Capcom Unity Ustream. I can say, that was pretty hilarious, and the questions about characters and who would we use on MVC3 was epic. I can say, Niitsuma San has great taste in Capcom woman! ^_^

The night was near the end, and I had an awesome time meeting everyone as well. I love going to these events because they are not only rad because of the sick musical guests, but getting to be around all these game lovers uniting and talking about the same things that they love about MVC3 is awesome. I cant wait to get my hands on my reserved copy of MVC3!!

Below is a video from the show, look for me at about 56 minutes in ^_^

One thought on “Linda Recaps Capcom’s Marvel Vs Capcom 3 Launch Party At The Mezzanine!”