I didn’t really know what the hell X-Men were when I was 12 but based on the name, I was a little afraid it was kind of naughty…

I’ve been a rabid X-Men fan ever since I first started watching the animated series. No, I’m not talking about the series that started up a few years ago. I’m talking about the stuff from back in the day before Pokemon existed. I didn’t really know what the hell X-Men were when I was 12 but based on the name, I was a little afraid it was kind of naughty, like something you’d see on Skinemax during the hours most people would be sleeping. But then I discarded that thought when I realized that :

a. It’s an animated cartoon
b. They’re showing it during after school hours which would hopefully mean it’s pretty innocent.

I dunno though. I mean, have you SEEN Rogue’s costume?! Hot damn. 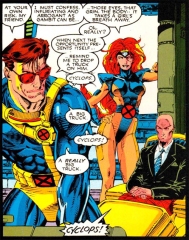 I liked the fact that they all had these super cool powers and whatever but what REALLY made me a crazed lunatic over X-men was GAMBIT!! Good LAWDY, HAVE MERCY!!! Those ruby red eyes, that crazy body armor thing, that trench coat….the fact that he could make things blow up due to his mutant powers. Yeah. I was in love. And that VOICE!! Oh sweet God…that dreamy, smoky drawl….I really didn’t stand a chance. And did I mention that chiseled body not-so-hidden underneath that body armor?

I really wished that I was that body armor encasing that glorious bod o’ his. My obsession with Gambit cranked my hormones from Slumbering Adolescent into something way over the hill and beyond Grandma’s house. I was a goner. He didn’t have me just at “hello”. I was doomed from the moment I heard “Daaaarlin” slip their way from between his celluloid lips. Oh yes, son. ….wow, it just got kind of hot in here.

When I found out Gambt was going to be in the new Wolverine movie, I was torn between jumping for joy and wondering if I was going to be set up for disappointment. No one on Earth can look as good as Gambit in the comics because, hello, like Jessica Rabbit once said “I’m not bad. I’m just drawn that way”. 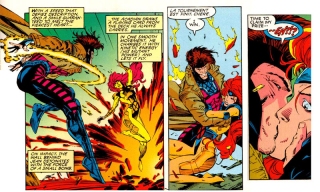 And, boy oh boy, is Gambit drawn to be a lady killer. I mean, that is part of his persona and those artists made sure they did him justice. Hell, for the man that was the Horsemen of Death, they better make him hot.

So back to why I was afraid I’d be disappointed. Ever hear of a little book entitled “Twilight”? With Edward, the hottest vampire that ever stalked the Earth? I was SOOOO IN LOVE with Edward and had him pictured perfectly in my head. Yum yum, gimme some. If he were real, he could feed on me any day of the week. I told my sister that and she thinks I’ve done lost my mind. Now she thinks I’m even weirder than she already did but dude…it’s EDWARD CULLEN!!! [insert fangirl scream here]

When I saw that they were going to make a movie out of it, I thought I was going to die from sheer ecstasy because I was so consumed with the series but that was before I saw who they had cast as Edward. Okay.

Robert Pattison isn’t bad looking but he is no Edward. He is not worthy to play Edward.

There is no friggin’ way the same guy that played Cedric Diggory could ever fill the shoes of Edward Cullen. No. Freaking. Way.

Sorry, Robert Pattison, you’re a good looking boy and all that but you will never be Edward in my mind. I just can’t take you seriously because you were the captain of a Quidditch team. Sorry, dude. I’m just sayin’. 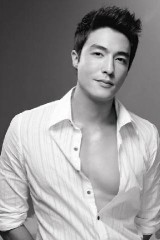 Surely by now, you can understand the apprehension I was experiencing when I bought the tickets for Wolverine but can I just say that any misgivings I might’ve had before I entered the theater was completely blown away by Daniel Henney? The man is beyond beautiful. My brother had to pry my fingers from out of his arm when Daniel Henney appeared on the screen as a gigantic God Of The Guns raining bullets on all those unfortunate enough to be his targets Btw, is it just me or is Hugh Jackman extra yummy looking this time around?

And then I saw Gambit. You know, they actually didn’t do such a horrible job in casting him. I just wished it would’ve been possible if they could find the guy who did the voice of Gambit from the animated series in the 90’s to speak Taylor Kitsch’s lines, I would’ve seriously gone into cardiac arrest right there in the theater. And if he had worn that body armor or even his trench coat….omg….total game over.

So. All in all, I thought the movie was good because the story line was pretty decent but you wanna know the real reason why I loved the movie? Two words. Man. Candy. And lots of it! Oh hells yes. My brother enjoyed the action and all the things that went Ka.Boom so it was a winner-winner-chicken-dinner all the way around.

Now I can’t wait to lay eyes on the new Star Trek, Transformers 2 and Terminator movies. Summer’s looking pretty good in terms of getting me to go see some movies.

Daniel Henney, you are gorgeous beyond belief but Gambit, you are the one who stole my X-men heart. How befitting since you are a professional thief. I love you.

Bonnie N. Clyde is a writer for YouBentMyWookie.com and the alias of the Supreme Commander. Not only is she a gifted storyteller and a self proclaimed dork, but she once choked out the Baroness just for fun.