I Can Train Dragons! Now Give To Me Toothless

When “How To Train Your Dragon” came out, I realized I simply didn’t care if I didn’t have a kid with me because I really wanted to see this movie.

There are only a few times in my life when I wish I either had kids or I was babysitting some for people. Most of these times are centered around either playing a game that looks like a lot of fun but is marketed to those people who’s age is still in the single digits….or when there’s a really good animated film out in the theaters.

When “How To Train Your Dragon” came out, I realized I simply didn’t care if I didn’t have a kid with me because I really wanted to see this movie. When the movie finished, I knew what I wanted for Christmas. I wanted my very own dragon.

I have to admit something. I fell in love with two beings in the duration of a few hours. The first one to win my heart was Hiccup. I’ve always loved the underdog and hope against hope they squash the bejeezus out of the favored pick. I’m the one rooting for the nerds to beat the snot out of the jocks to win the hearts of the ladies. I’m the one who believes that geeks shall inherit the earth and brains will triumph over brawn.

Hiccup is the embodiment of why I’ve always believed. He makes you feel good not just about yourself but in believing in yourself despite what others say. He’s the unlikely hero and it is this precise quality that made me want him to show all those gigantic sides of beef known as Vikings that they’re wrong.

The other one who stole my heart? TOOTHLESS!!! Omg, I want him.

Most girls have a thing for horses, myself included. I’m sure there’s a scientific study out there that proves that to some effect. After this movie and that little film known as “Avatar”, I’m willing to bet theres a new generation of females who will be wanting and wishing for a dragon of their very own to ride. Screw this earthbound business. I got some stars I’d like to meet and a lot of clouds to plow through, thanks.

And what’s not to like about riding a dragon? Talk about the feeling like you’re truly free.

Did no one else think Toothless is what would happen if you let a Pokemon (perhaps Ivysaur or Bulbasaur) mate with Stitch from “Lilo and Stitch?” 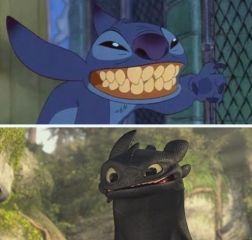 All the dragons, big and small, remind me of felines in the sense that they never lose their sense of self BUT they’re trainable like dogs! They like to play fetch, they like their bellies rubbed but they purr like cats. Great!! Someone finally managed to Frankenstein together the perfect pet that can do all that in addition to flying with me on its back and frying all the people I don’t like.

Why This Movie Works

Cute nerds and awesome fire breathing pets aside, here’s why I think this movie won the hearts of so many.

1. It reinforces the idea being yourself is a beautiful thing because we’re all special. Aww…happy fuzzy feelings for everyone.

2. Friendship and understanding is what we can find if only we could put aside our fears and prejudices. Pretty beefy topics for something as seeminly innocent as an animated film. Then again, it’s good to get them while their young.

3. Heroes come in all shapes and sizes. This was something Mariah Carey knew back in the day when she crooned “There’s a hero/If you look inside your heart/You don’t have to afraid/Of what you are”. Hey!! That should be the theme song to this movie.

4. It makes the kids feel good because, more than ever, they’re learning things at a pace their elders can’t keep up with. This means they’re the ones teaching their parents how to use the computer and how to navigate this thing known as the Internet.

5. The adults are reminded that the most revolutionary ideas are usually found in the minds of the young because they’re more or less fearless in their youth. We learn caution as adults but to be young is to throw caution to the wind and ride it if you’ve got yourself a trained dragon.

Bonnie N. Clyde is a writer for YouBentMyWookie.com and the alias of the Supreme Commander / Ultimate Destroyer. She writes often in her blog over at MissBonnified.com and buys tickets for R rated movies only to sneak into G rated ones.