Have You Seen My Liver? I Think I Lost It In Vegas

MissBonnified reports from her Birthday/ Halloween/ vacation break in good o’ Sin City. Doing her best impression of “The Hangover,” she recaps her Vegas debauchery, exploits, musings and conquests. 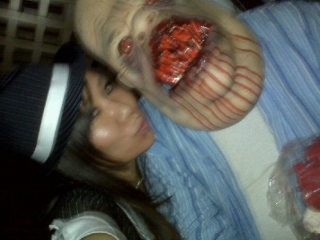 Hope all you people had an awesome Halloween. I know I did. Actually, if the pictures are any indication, I had a killer Halloween. Why? Because I partied it up in Vegas with a bunch of my friends.

Did I mention that this was just Part One of my Birthday Month / Vacation? There were 4 of us and we decided to do a combined birthday thing. That was pretty insane…I’m actually still recuperating but I’m happy things didn’t exactly go down like in “The Hangover”.

So far, from what I remember, the only similarities are as follows :

Okay, so I wasn’t there for a bachelor party (or bachelorette party for all you technical people) but we were there for a combination party for 4 of us. …so that basically means it was like a bachelor party but me and 2 of my girlfriends were at the * ahem * club front and center with the boys on Day One of Vegas Debauchery. We made it rain green paper. I think the 3 of us girls stumbled out at 6:30 in the morning. I have no idea how the hell that happened. I’m still trying to figure that out since we got there at about 3 in the morning. Amazing how time flies when liquor is involved.

The Clothes Make The (Wo)Man

Dude. It’s Halloween. We have to dress up. I am happy to report that all 70 of us in our party dressed up. Some of the more memorable ones was my friend who dressed up as the Sugar Daddy. No, I’m not talking about Mr. Hefner. I’m talking about the candy. Another one that I liked from our group was this crazy, cracked out Pokemon looking thing. I actually have no idea what the hell it was supposed to be but the guy managed to make this insane headpiece with floodlights for eyes.

It looked like what would happen if Kidrobot’s Dunny mated with super freaky robot mascot thing for Bad Robot Productions.

The costume that kicked the ass out of all of our costumes? The dude that dressed up as an iPhone. Know what the back cover of his costume read? iPhuck. And in lieu of the bitten apple? A silhouette of a nekkid lady.

I have to admit, I am very impressed because this guy made it himself and it looked friggin’ good. All of us girls couldn’t keep our hands off him.

Sheer genius, if you ask me.

Granted, we didn’t steal a cop car and go for a joyride (for which I am eternally grateful) but we rolled in the mother of all Party Hummer Limos. This thing wasn’t a beast. It was an absolute beast of a party bus.

I’m happy to report that we didn’t trash our room to the point the boys did in the movie but my suite looked like a hurricane ripped through it. There were stiletto heels everywhere, random bits of lacy stuff tossed over all the furniture because we were trying to find all the parts to our costumes, a veritable graveyard of energy drinks and room service stuff all over the kitchen counters. 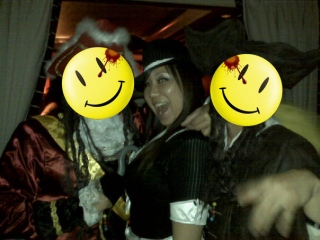 But the real reason why I thought of “Where’s Waldo”? Some of us mysteriously disappeared during the night only to wake up in a completely different casino. Others of us lost room keys so I woke up to find one of the warriors from 300 passed out on my couch while others yet were still partying when I finally dragged my ass out of bed. I don’t know how they do it.

And that’s where the similarities end because, as far as I know :

Hell, we even ended up with a mystery on our hands! My 2 bedroom suite was shared by 5 girls. None of us invited anybody besides our guy friends in.

Therefore, imagine how surprised we all were when we woke up Sunday afternoon to find a pair of boxers in the middle of our living room on top of one of our sweaters.

I know which boys came through the suite.
I also know none of them got nekkid.
None of the boys had keys to the suite.

To this day, none of us in our party could figure out who they belonged to. Dun dun duuuuun….talk about trick or treat. In case you’re wondering, I totally count this as a trick because it’s not a treat when you find somebody’s underwear in your living room.

All in all, I have to say this was a trip to remember. Thank God for digital cameras a.k.a. Backup Memory because none of us could fully piece together the night(s) on our own. It’s gonna be hard to beat this Vegas trip but knowing my friends and I, we’d find a way.

Bonnie N. Clyde is a writer for YouBentMyWookie.com and the alias of the Supreme Commander / Ultimate Destroyer. When she’s not pulling her best “Hangover” impression, she writes in her blog over at MissBonnified.com.