Perhaps one of the greatest Saturday morning cartoons, “Plastic Man,” is now available in a 4-disc, 35 episode complete collection! 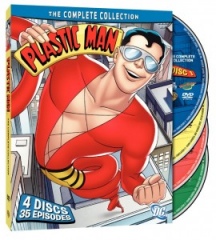 Perhaps one of the greatest Saturday morning cartoons, “Plastic Man,” is now available in a 4-disc, 35 episode complete collection!

Co-produced by Hanna Barbera, The Plastic Man Comedy/Adventure Show is based on the DC Comics superhero, which originally appeared in comic books in 1941.

The original Plastic Man discovered his powers after he was sprayed with an unidentified substance that entered his bloodstream, causing a radical physical change that allowed his body to acquire all of the properties of rubber. Produced by both RubyRuby reviews-Spears Productions and Hanna-Barbera Productions, The Plastic Man Comedy Adventure Show first aired in 1979 Saturday mornings on ABCabc reviews, right after Super Friends.

This 4-disc set also includes the “Plastic Man Animated Series” Unaired Pilot Episode (which you can watch some of below), and an incredibly fun Retrospective Featurette. The featurette is really above-and-beyond all things considered. It’s a trip back in time that puts the show into perspective, and sits you back in front of the tube on your shag carpeting.