Wanted: Lindsay Lohan (Does Not Need To Be Alive)

Only in Hollywood can someone get away with not appearing in court. Heaven forbid mere mortals like you and I have to obey the law that celebrities can brush aside like last year’s trends. 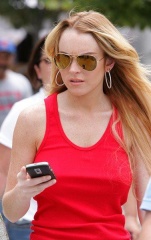 Only in Hollywood can someone get away with not appearing in court. Heaven forbid mere mortals like you and I have to obey the law that celebrities ( * ahem * cough * Lindsay Lohan * cough * ahem * ) can brush aside like last year’s trends.

Oh wait. I said “celebrities”. I’m sorry. That description no longer fits Lindsay Lohan anymore. Someone please tell me what she’s done of late to make her think she can get away with breaking the law multiple times and endangering people’s lives while under the influence. I am so sick of her. I really am.

What exactly has she contributed to society besides giving us photos of her embarassing herself in public? Hell, she doesn’t even make movies anymore. I was going to say “good movies” but I think the last good one she made was “Mean Girls”. (Pssst. I mentioned that movie because I looooooved everyone else’s characters. Her character…..not so much.) She also tried and failed at singing….kind of like Paris Hilton but at least Oakenfold bothered to make a remix of one of her songs. I have to admit to liking that one. I know….I’m so ashamed….

So let me get this Lindsay Lohan mess straight. She’s busted for driving drunk and is now on probation. She’s supposed to be in LA right now for her court appearance. Instead, she’s galavanting around France and going to parties.

What gets me the most is her excuse for not keeping her COURT DATE.

ARE YOU KIDDING ME?! Any GROWN and RESPONSIBLE adult would know better!! Anyone with even 1/50 of a functioning brain knows that if you’re due in court, you arrange your schedule around that appointment. This isn’t a coffee date, people. This is friggin’ COURT! As in, your ass could go to jail. Why do I suddenly see and hear Beavis and Butthead snarling “Breakin’ the law, breakin’ the law!” in my head?

Her actions clearly tell me the following :

She is an adult by default only because she’s chronologically and physically of adult age. However, her development seems to be arrested somewhere around….12. Why? She appears to need people constantly reminding her where she’s supposed to be, what she’s supposed to be doing, what’s good for her and what’s bad. And even though she sort of has those over glorified babysitters around her, they are apparently doing a horrible job. Why? Because she’s still in France.

This brings me to the next point.

Only those who have yet to go through puberty will act the way she does. She parties out of control and either can’t hold down her job (didn’t she get booted off a movie or something?) or she does such a crappy job of it that no one wants to see her movies or buy her music. That’s sad. She also has no working clue of what “responsibilty” and “being responsible for your actions” mean.

So she made a mistake. Plenty of people do. However, driving drunk isn’t just an “oopsies” kind of deal. A court ordered appearance also isn’t something you can just blow off. Passports are legal documents that help establish identity. Last time I checked, those papers are precious. You guard things like that so for her to be like “Whoops, it’s conveniently missing so I can’t be where I’m supposed to be” makes me mad. Is it just me or does her attitude reek of “The dog ate my homework” kind of pathetic?

The bubble boy lived in a bubble because it protected him. Lindsay lives in a bubble where her cadre of lawyers protect her ass from….well….everything. They posted her freaking BAIL, for crying out loud. I kind of feel like I shouldn’t be this disgusted with her because she’s surrounded by people who more or less tell her by their actions that whatever SHE’S doing is okay.

As I’m writing this, she has a new temporary passport but it’s “unclear when she would return to Los Angeles.” What. The. $%^*.

You. Missed. Your. Court. Date.

Logic would assume you’d get your ass back here pronto to avoid landing in further legal trouble. Right? Or am I the retarded one for thinking this way?

According to the LA Times, Judge Marsha N. Revel is going to take a day out of her vacation to attend the hearings. Now this is a woman who knows how to handle her business! Way to go, Judge! I am sorry her vacation schedule has to be altered but, damn it, I would’ve done the same thing if it means I get to rule over Lindsay’s hearing. Time for some layin’ down of the law!!!

You know what? I just figured out a way to get Lindsay to show up to court. Tell her it’s an exclusive party and the paparazzi will be there too. She’ll not only get tons of press but she’ll be the primary focus of attention. No need to say it. I’m a genius.

Bonnie N. Clyde is a writer for YouBentMyWookie.com and the alias of the Supreme Commander / Ultimate Destroyer. She writes in her blog over at MissBonnified.com and would kick some sense into Lindsay Lohan if she ever got within five feet of her.