After 30 Years, Harrison Ford Breaks Silence And Speaks Out About ‘Star Wars’

It only took 30 odd years, but Ford finally breaks his silence and lets fans know how he really feels and his experience filming “Star Wars.” 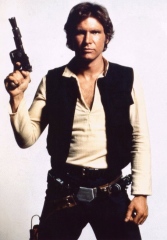 Aside from maybe a few DVD bonus features, we’ve never really heard Harrison Ford speak publicly about his experinece filming Star Wars… until now. It only took 30 odd years, but Ford finally breaks his silence and lets fans know how he really feels.

As part of the 30th anniversary of “The Empire Strikes Back,” Ford participated in a charity event for St. Jude Children’s Research Hospital. As part of George Lucas’s “The Empire Gives Back” initiative, Ford attended a Hollywood screening of Empire and spoke about the franchise for 30 minutes following the screening.

It’s here, for the first time really, he Ford opens up revealing some interesting stuff.

Here are 10 juicy tidbits Ford revealed for donors who paid $100-$175 for tickets to the special screening:

The cast stayed in the best hotels this side of Hoth
Scenes on the ice planet Hoth were filmed in Norway during blizzard conditions. Sorry to ruin the illusion, but they actually weren’t even that far from civilization. “The conditions were so severe that they put the camera in the back door of the hotel we were staying at and shot out the door,” Ford said. “So we were 12 feet from the hotel, out in the blizzard.”

Still, Ford almost froze to death
Even 12 feet from a cushy hotel, Ford nearly froze because Han Solo’s Hoth costume was not designed for real outdoor weather. “The one part I remember that was a little uncomfortable was Norway where we shot the snow scenes. I hadn’t been expected to work there, so the costume that I had was built for the stage. At the last minute they decided that weather conditions were such that the schedule had to be changed, and they decided to shoot my scenes not on the stage but in Norway. So I was rushed up there, and the only way to get to the set in the midst of a blizzard was on a snowplow train, which had a giant auger on the front of it and pushed through the snow and delivered me to the set. We immediately went to work.”

Nothing worked on the Millennium Falcon
Remember when they couldn’t get the hyperdrive to work to jump to light speed? That was the least of the Millennium Falcon’s problems. “The thing I remember is they purchased all of these toggle switches. Because we made the film on a budget, they hadn’t bought the ones with springs. So if in a scene you would flip up some switches, if you didn’t get out of the frame quickly enough they would go back down, because there were no springs. I think they solved that by the second film.”

Chewbacca never actually sat in the cockpit
By the time they built the Millennium Falcon cockpit, they realized they hadn’t accounted for Peter Mayhew’s size, let alone his cumbersome Wookiee costume. Any shot in which you see Chewie sitting down was accomplished through the magic of editing. “When they were building the cockpit of the Millennium Falcon, I was anxious to get inside into it and see what my office looked like. They kept saying no, that it wasn’t finished and they’d let us in as soon as we could. Well, we didn’t get in until the morning that we shot. Of course it was impossible for Peter, built of the scale that he is, to get in the seat. So every time you see Peter in the seat, he’s been edited into it.”

He doesn’t think he had the best lines
Really, Han Solo? You don’t see it? “Sorry about the mess.” “It made the Kessel run in less than 12 parsecs.” Ford says, “I never thought I had the best lines. I was very happy to be involved. I was pleased to be a part of an ensemble. My character had a role en suite with the rest of the characters. I had a part to play that had kind of a keystone effect amongst the callow youth and the wise old warrior and the princess. There was this character that I thought the luck of the character was that he probably represented close to the audience’s sensibility, because of his distance from the mythology, because of his resistance to the mythology. That was the luck of the part for me.”

He was responsible for “I love you” … “I know.”
At least Ford acknowledges that this was a great line. He and director Irvin Kershner fought Lucas for it. “Film is a collaborative process. I’m happy that I was able to make a small contribution. It didn’t go down so well with George at the time. He would have been a lot happier with the scripted line, which is ‘I love you, too,’ but I felt, and Kersh agreed, that there was the opportunity for a more character ‘smelling’ moment. So we shot that among other versions. We did shoot ‘I love you, too,’ but when Kersh presented his cut, he used the line ‘I know.’ George said, ‘That’s gonna get a laugh. That’s not good.’ Kersh and I both said, ‘It could be a good laugh at that moment.’

“I remember being at the test screening in San Francisco sitting next to George, Kershner on the other side, and he went into the screening predicting that this is going to be a bad laugh, but I think the audience convinced him it was not so bad. I take no ownership. If Kersh hadn’t thought that it was a good idea, we wouldn’t have shot it. It is a collaborative process, and I think what it speaks to more than anything else is that when you have the opportunity to make something and you care about what it is you’re making, you try and you try and you try. You just don’t settle. You try because you care about the product, and a little thing like that you end up investing in because you think it might make it better.”

Star Wars saved Ford from hard labor
You may know this already, but Ford had already given up acting after American Graffiti. He kept in touch with George Lucas and Francis Ford Coppola as a carpenter. He was working on a portico for Coppola’s office when Lucas was casting Star Wars. “I worked at night because I didn’t want a lot of people around while I was trying to do this work. I was working alone, and George came in with Richard Dreyfus for the first of the interviews for Star Wars. We said hello, chatted briefly, and then Fred Roos, who is George’s casting director, asked me if I would do them the favor of reading with the prospective actors that they were testing for the part, with no real expectation that I might be involved. After I read with probably 300 actors, they asked me if I would want to play the part, and I said sure.”

Why Harrison Ford wanted to kill Han Solo
You definitely know this already. Harrison Ford wanted Han Solo to die in Return of the Jedi. Here’s how he puts it now. “I just thought that it would supply some emotional bottom, a grounding. George didn’t agree, and so that did not happen.”

Han Solo has finally outgrown Obi Wan Kenobi
This’ll teach you young punks to disrespect your elders. It’s been 33 years since Ford looked up at Sir Alec Guinness. Now the late Sir Alec doesn’t seem so old. “I looked at Alec Guinness, who, at the time, I knew he was a wonderful actor but I thought he was an old man, an old wonderful actor. When I sat there [recently] and I was looking at him, I did the math. I figured out how old he was in Star Wars, and he was about six years younger than I am now. It gave me pause.”

30 years and he still doesn’t get it
Ford was happy to donate his time to raise money for St. Jude’s. However, the phenomenon of Star Wars that would lead people to pay hundreds of dollars to hear him speak, that’s still a mystery to him. “I don’t know that I understood it very well. I’m not sure I understand it yet, but I think the invention of it is obvious. Albeit 30 years old, the originality of it was very striking for the time. I think the mythology of it is what makes it work as much as anything else, and I think George tapped into some psychic vein which made the whole thing work. That plus John Williams’ incredible music, it’s the glue of the piece, I think. What I noticed tonight as much as anything else is the contribution that sound made. The THX system that George innovated was remarkable at that time and really went a long way to creating that kind of energy that the film has.”

Here is a video clip from part of the interview: