There are certain people you never want to piss off. The cop writing you a ticket, your boss and the people who have direct contact with the stuff you’re about to eat or drink… I’d like to give you list of what NOT to do to piss off your bartender. 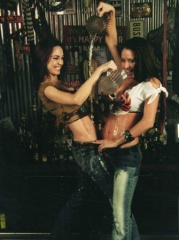 There are certain people you never want to piss off. The cop writing you a ticket, your boss and the people who have direct contact with the stuff you’re about to eat or drink. Don’t believe me? Allow me to introduce you to a little movie called “Waiting” with Ryan Reynolds who, by the way, is epically gorgeous. Yum.

I used to be a bartender during my college years and I had a blast. Actually, “blast” wouldn’t really describe the experience I had while behind the bar. “Blaze of Glory” and “Awesomeness beyond all that is Awesome” would be more like it because my bar was a small, hole in the wall place and we were like the neighborhood’s secret Cheers crossed with Coyote Ugly. I knew everyone’s name and their poison of choice.

But there’s something I never understood. What is this fascination about bartenders? Seriously. My bar was manned by a small roster of uber hot females who were tons of fun and who could hold their liquor. God, I miss them. We also came complete with our own set of bonafide “groupies”. Why? I don’t understand this. And why does it seem like it’s a goal for men to hook up somehow with their bartender? Actually, women are just as guilty. I hear women confiding in their girlfriends about how they’re so in love with their bartender. It seems like women fall in love with their bartender whereas men just want to bang theirs. I suddenly have that T-Pain song in my head. “I’m in looooove with the baaAAAAr tender.”

Yeah. I don’t understand this.

People liked to ask me how many times I get hit on during a night when I was like an Epic Gunslinger but my shots were made of liquor and my gun was locked and loaded with booze and soda. My honest answer? I’ve no idea. It’s not like I go around with a notepad and make little tally marks every time I’m working. My standard answer is that since I’m the bearer of alcohol…what’s not to love?

But seriously…what’s up with that? I think it’s because this particular occupation has been hyped up and sexed up a la “Coyote Ugly”. It’s supposed to be some kind of glamorous job and we’re like the direct descendants of some Epic Wise One who dispenses words of wisdom to our flock of drunkards. Well, I’ve got news for you.

There is nothing sexy or glamorous about having beer/martinis/any kind of alcohol slopped all over your clothes before drying into a sticky mess.

There is nothing fantastic about praying to God you don’t get pulled over for speeding or something and then being forced to do the whole DUI test thingy because you reek of the alcohol that has accumulated on your clothing. The fact that you didn’t drink at all is irrelevant once you see those not-so-happy blue and red lights flashing behind you.

There is nothing fun about stupid guys thinking it’s acceptable to stand thisfarawayfromyou as they talk to you because all the alcohol they’ve consumed somehow convinced them into thinking :

1. They are extremely charming,
2. They are somehow sexier now than they were 2 hours ago
3. You really want to go home with them. 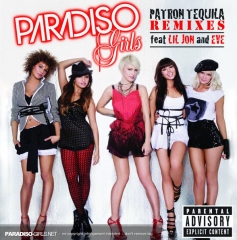 Why did I start thinking of those bygone nights? I was at my local watering hole when my Dj friend started playing this song by the Paradiso Girls. It’s called “Patron Tequila”. The lyrics go a little something like :

I took some liberty with the lyrics because they drop the F-bomb a few times. Tsk tsk. Language, people. Language.

The goal back then was to NOT get them so drunktarded to the point of tossing their collective Cookie Monster shots. I do not recommend this shot. It tastes NOTHING like a cookie but it will kind of turn you into a hairy monster because it’s a pretty lethal combo of liquors. My rule used to be “You puke, you clean”. End of story. Hell no am I going to wipe the bar and play “Let’s see what you had for dinner” because you managed to turn yourself inside out.

In honor of me remembering the nights when bottles of liquor would flash like quicksilver, shots sprouted wings and would fly all over the bar while people donned beer goggles, I’d like to give you list of what NOT to do to piss off your bartender. This isn’t to say you must kiss ass to those who wield the booze but a little common sense, courtesy and mutual respect means the chances of you getting served faster than the obnoxious idiot next to you is that much greater.

On that note, here we go!