Oh, When The Saints…

I’ve since decided to rename Super Bowl Sunday into the Man Holiday. This is the day when I think all men should be able to do whatever the hell it is that you guys do to make you feel like Ice Cube when he said “Today was a good day.” 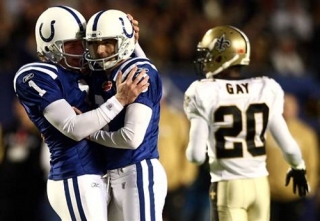 This past weekend was amazing for a couple of reasons. They are as follows :

That’s right. I’ve since decided to rename Super Bowl Sunday into the Man Holiday. This is the day when I think all men should be able to do whatever the hell it is that you guys do to make you feel like Ice Cube when he said “Today was a good day.”

Eat an entire large, meat drenched, artery clogging pizza all by yourself. There is no need to share on this day.

Sprawl on the sofa and let out the loudest and smelliest burp you possibly can. Bonus points if you can recite the alphabet.

My boyfriend, Clyde, did all this except the inappropriately scratching of the nether regions. That’s because he rocks.

And yes, I decided to bestow upon him the nickname of Clyde. Craziness.

3. Clyde Spent The Man Holiday With Me

Before you start thinking I made my new man spend this day with me, allow me to deliver a gonad crushing kick to that theory. He asked me if he watch the game at my BRAND SPANKING NEW APARTMENT and order pizza from Pizza Hut. I was like “Oh, hell yea!!!”

Any excuse to see my man and have pizza is all good with me. :D

My apartment has absolutely nothing in it. I have a 27″ Toshiba from the 90’s and a rolling TV stand that’s on it’s last hurrah. I have zero furniture…and yet this man was happier than a…than a…than a I-Dunno-What to be sitting on my highly decorative and comfy imaginary sofa (read : The Carpeted Floor) as he watched the game on an old school TV set.

At one point, our butts were flattened by sitting on the floor for so long so I dragged out a pillow and we shared it lying on the floor with the tops of our heads touching.

Aaawww!!! Repeat after me. Aaawww!!

That’s right. You may all throw up in your mouth now.

Okay, before I get started here, does no one else think The Who was a dumb choice for the half time show? Is it extremely sad that I only know who they are because of the opening song to CSI : NY? I’m not kidding. Clyde knows more about them than I do and I wanted to sound smart too. I was so happy when they let rip the first couple of chords to the CSI song and the following conversation ensued :

Clyde : Yes…yes, baby. That’s right….but it’s also one of their more famous songs….
Bonnie : Oh, I know! Thank God for CSI, huh? Otherwise, NO ONE would know that song!

Another epic blond moment came when I was watching the announcers talk about something I didn’t understand. They were discussing something about some pass when I realized I recognized one of the faces on the panel.

To my credit, I know he’s supposed to be a really good quarterback (they’re the ones who throw the balls around) and he played for the Miami Dolphins. Then again, the only reason why I knew that was also because I watched that Jim Carey movie. :D

I talk like I actually follow football and know what the hell I’m talking about. I’ve actually got no clue about how football works but it was a damn exciting game to watch despite the crappy choice for the half time show and the mostly lackluster commercials.

My favorite one was the Dodge one where the tagline was “Man’s Last Stand”. That was hilarious. Oh! And the Dorito one with the golden retriever and the anti-barking collar.

Bonnie N. Clyde is a writer for YouBentMyWookie.com and the alias of the Supreme Commander / Ultimate Destroyer. She writes a lot in her blog over at MissBonnified.com and doesn’t know much about football but is an expert with tight ends.