Wanna know what I have in common with zombies right now? We have the same kind of walk… So how did I fall so far from grace as to compare myself to a zombie? Three words. Disney. Half. Marathon.

Wanna know what I have in common with zombies right now? For starters, we have the same kind of walk. It’s not my usual supermodel strut because zombies don’t sashay to the beat of their own personal drummer. Nope. They shuffle their feet around and lurch awkwardly. So do I. They make super sexy sounds like “garrrggghh”, “uuuuuggghhhh” and “aaaggghhhh”. So do I especially when I’m trying to get up from the couch/bed/floor because I fell down.

So how did I fall so far from grace as to compare myself to something as gross as a zombie? Three words. Disney. Half. Marathon. A half marathon is 13.1 miles. Hopefully this explains why my legs are refusing to cooperate.

That awesome event was Sunday of this past Labor Day weekend. I’ve been furiously patting myself on the back for being smart enough to schedule myself off these past couple of days so that I could sort of recuperate. I still can’t believe I managed to do it but my aching, screaming muscles remind me constantly that I did. It is sheer agony to attempt to walk anywhere for any distance. Stairs pwn me and street curbs now possess the power to make me want to cry like a little boy. Never fear. I don’t cry because I’m too awesome to.

Speaking of awesome, I finished the race in under three hours. My initial goal was 3 hours 15 minutes because I nearly died the last time I did a long run. It was my last long pavement pounding practice before the real deal and my goal was 12 miles. I did everything wrong that you could’ve possible done (i.e. – I didn’t eat enough carbs, I ate too much salt and I didn’t drink enough water. I was so f*cked) but you know what they say. What doesn’t kill you only makes you stronger.

And that’s exactly what happened. Well, that and my overly active imagination combined was the catalyst for how I managed to finish the race well before my goal despite literally taking the time to smell the flowers. I got distracted with all the wonderful sights Disney laid out for us to enjoy as we ran through the Happiest Place On Earth.

Looking back, I am almost convinced of the sinister nature of pulling out all the stops.

You’d think the greater majority of us who ran yesterday have never been to Disneyland before. Ever. I suppose it’s a possibility that a small percentage of the runners yesterday were Disneyland virgins but surely not all of us were. Yes, I’m guilty of what I’m about to say next. There were so many of us who were distracted by all the characters who came out in full force to cheer us on.

I’m sure the more disciplined runners enjoyed the sight….as they ran past them. Me?

I slowed down, came to a complete stop to gawk and take pictures like a dork. If I hadn’t stopped as often as I did, I think I could’ve finished the half marathon by 2 hours 45 minutes.

Yes, that’s right. I sat down, averaged out my interval times and realized I could’ve been that much faster if I hadn’t stopped and stood in line to take a picture with Lilo and Stitch. But, to me, it was worth it.

Now I know what not to do for next year.

Nothing motivated me better and for as long as my dread of what I took to calling The Short Yellow Loser Bus. I actually have no idea what color this bus is or how big it was BECAUSE I WAS TOO AWESOME TO HAVE TO SIT IN IT! w00t!!!!

You see, Disney decreed that all must finish the race within 3 hours and 30 minutes of when you start running. This averages out to a 16 minute mile. That isn’t very fast. But here’s the thing. Out of the 14,000+ people who signed up, only 12300+ finished the line. That means approximately 1,700 people who crossed the start line were dropped off and didn’t get a medal.

During my training sessions, I became obsessed. I talked about the Short Yellow Loser Bus all the time and my fear of having to ride on it. Don’t get me wrong. There is nothing wrong with trying your best and still not succeeding the first time you attempt something. Heaven knows how often I fell into that category.

But I actually trained for this. I tried really hard these past few months to get ready for this event. I’ll be damned if I had to get on that bus. They’re gonna have to cram me in there kicking and screaming. Either that or I envisioned myself running at a pace of 15 minutes 45 seconds as the Short Yellow Loser Bus hovered ominously over my shoulder.

I also learned that if you’re lagging at mile 10, Disney will launch a bunch of people equipped with MEGAPHONES WHILE RIDING BIKES to “encourage” your ass the last 3.1 miles.
I can hear it now :
Disney “cheerleader” : HURRY YOUR ASS UP, PUNK!
Tired Runner : I’m trying….
Disney “Cheerleader” : I SAID HURRY YOUR ASS UP, FOOL!! DO YOU WANT TO RIDE THE SHORT YELLOW LOSER BUS???!!! HUH???!! DO YOU????!!!
Tired Runner : ….no…. * sob * sob *
Talk about motivation, man. Maybe that’s why I probably had the best running time of my life (AND THAT INCLUDED ALL THE TIMES I STOPPED TO BE A RETARD TO TAKE PICTURES!).

Where My Ladies At?

I already mentioned that there were 14,000+ people who signed up for this event this year. Did you know that 64% of them are female?

Fellas, I’m talking to you right now. If ever there was some incentive to drag your ass out of bed at some insane hour in the dead of the night, this is it. You’ll be surrounded by a huge bunch of women who are clad in short shorts and body hugging tank tops. They are all bared legs, bare arms and ponytails every which way you turn!

Some girls are even wearing shirts that say (and I’m not kidding), “Stop and talk to me! I’m single!”

The song I play when I need a kick in my ass to keep me going when I want it give up is currently “I Like That” by Static Revenger feat. Luciana. It used to be “Love Me Do” by Akira Yamaoka. It’s from Beat Mania IIDX 7th Style. That’s right. I used to play that game in 7 key. It was fun.

People wear really inspiring shirts. I read one that said “Run by the foot, Dream by the mile”. 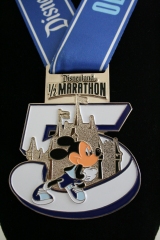 There was a medicine station around mile 11. I was too tired to notice but Clyde told me he saw people in there. I was sad for them because they were only 2.1 miles away from finishing. Hopefully they make it next year. I also hope they don’t give up on their dream of getting a medal one day.

Runners come in all shapes and sizes. I ran faster than people I thought were built like runners (lean, very little body fat and old enough to be in high school) but ended up being passed by people who were chunkier than me and older than me. I also saw a lady power walking with the help of her metal cane. She was going pretty fast too. Running is a very humbling experience and taught me yet again to never assume things about people.

People wear really funny things. I saw Wonder Woman, Tigger, a crapload of Minnie Mouses and a gazillion Tinker Bells. I started a running count of how many Tinker Bells I killed (read: passed by) by the time I finished the race. I lost track because there were that many. That and I forgot how to keep a running count by that point.

My favorite was this guy who dressed up as Snow White. That was so awesome.

I saw Elvis. He was running the marathon.

I can’t wait to do it again.

Bonnie N. Clyde is a writer for YouBentMyWookie.com and the alias of the Supreme Commander / Ultimate Destroyer. When she not “fun running” at 4 in the morning or parading around her apartment wearing her Disney Marathon medal, she writes in her blog over at MissBonnified.com.