Tigh & Gaets Action Figure 2-Pack
A Diamond Select Release! When first assigned to the Battlestar Galactica, neighter Saul Tigh nor Felix Gaeta had any inkling their lives would never be the same again. Featuring two of the most dedicated (and ill-fated) officers in the Colonial Fleet, this all-new Battlestar Galactica two-pack features Colonel Saul Tigh and Lt Felix Gaeta in their signature second-season looks and includes multiple accessories from the hit show! 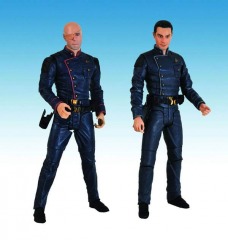 Minimate-Flyer PX Assortment
A Diamond Select Release! Art Asylum Designs and Sculpts! Battlestar Galactica Minimates are back and this time they’ve got their own transportation covered! This all-new assortment of Mini-Flyers features two Previews Exclusive ships – the nearly-unstoppable Scar Cylon Raider and the Battle Damage Mark VII Viper – each with their own exclusive Battlestar Galactica Minimate! Pop the cockpit, buckle up and get ready for the ride of a lifetime! 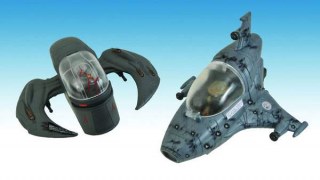 “Razor” Retro Classic Cylon Warrior Action Figure
An Art Asylum Sculpt! From the Art Asylum/Diamond Select Toys ine of highly-detailed 7″ scale action figures based on the Battlestar Galactica Razor film comes this exclusive figure! As seen in the film, this figure is the retro version of the Cylon Warrior and comes with accessories. Blister card packaging.