Miss… Zombified In An Inception Nightmare Before Halloween?

Stuck in zombieland, I had no super human powers to obliterate the literal walking dead. So I did the most obvious thing in the world. I went shopping. 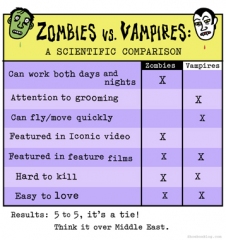 I make no secret of my extreme dislike for zombies. You guys all know this by now. You can all imagine my disgust when I had a dream of Hollywood proportions featuring these revolting critters.

* No names have been changed to protect the weird since they said it was okay for me to use their real Twitter names. At least I asked. :D *

Accelerate – In other news, I dreamt I ran a half-marathon with a twist – I was also being chased by celebrity zombies, including Linda Hamilton.

Missbonnified – @accelerate did you tell her “i’ll be back” as you ran away? ^^

Accelerate – @missbonnified Zombies vs. Terminators. Someone needs to make this happen.

MissBonnified – @accelerate I concur!!!! I think terminators win though…..unless the zombies figure out how to mutate virus into software virus. :)

Accelerate – @missbonnified yeah, it’d be pretty lopsided actually. but i was thinking… what would happen if it were zombies vs. vampires?

MissBonnified – @accelerate hm..I still say vamps win. They’re smarter and during the battle over food (humans), vamps have the edge, imo. What do u think?

Accelerate – @missbonnified would a zombie bit by a vampire be wanting to eat brains or blood? the outcome of this epic war depends on that very question

MissBonnified – @accelerate hmmm…..Oooh….what if they survive on BOTH??!! But they’d still be battling over dominance of food.

Accelerate – @missbonnified you do realize once we mech up, that’s when Skynet becomes sentient & takes over. At that point, the Predators come-a-hunting

MissBonnified – @accelerate bastards!!! With Predators cometh Aliens. Hm….now I have to think a little harder….

All2Swift – @missbonnified @accelerate I just want you guys to know you’re having the best tweet convo ever. Werewolves always win in the end, btw.

Accelerate – @all2swift @missbonnified werewolves. Pshaw. They’re stuck on the sidelines after having their numbers decimated by a run-in with Godzilla

Accelerate – @missbonnified @all2swift yeah, but can Voltron and pals really stand up to a fleet of Cylon Battlestars?

MissBonnified – @accelerate hm….maybe because don’t u remember the old transformer 80’s movie song? U’VE GOT THE TOUCH! U’VE GOT THE POWER!!

All2Swift – @accelerate @missbonnified I can’t believe Robotech has not yet been mentioned.

MissBonnified – @all2swift @accelerate argh! I was about to but opted to sing transformer song.

And that concludes how the idea of a crazy zombie dream got impregnated into my mind Inception style. 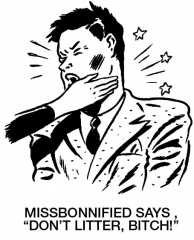 I don’t remember how the dream started (oooh…how Inception of me!) but I was in some super dirty room watching TV on one of those old school 80’s TVs with the knobs. I remember thinking “Where the hell am I….and why are there so many beer cans” while trying to listen to the news. The story they were covering was how some joggers were on a trail in the local park when they noticed a lot of litter. Being environmental nuts, they started picking up all the trash when one of them stumbled over a huge glass bottle. As they moved it out of the way, they uncovered two sets of hands buried in the ground around the bottle.

At this point, I stopped listening to the news reporter who was blabbering about the possible work of a serial killer because I was hyper focused on the hands. Was it just me or did the hands MOVE?!

Yes!! Yes, they did!!! I watched in horror as the gray, mottled hands slowly gripped the bottle and used it as a roller to scoop the dirt away from where they emerged from the ground. Holy shit….MOTHER F*&^#@$, WHAT THE #$%& IS GOING ON??!! I’m in health care so I know what LIVING hands look like and these were the exact opposite….but why were they moving? And why the hell am I the only one noticing this? The pretty blond reporter AND HER CAMERA CREW WHO HAD THEIR CAMERAS TRAINED ON THE MOVING HANDS were completely oblivious to the fact that the hands were actively attempting to dig out the body they’re attached to.

I started running through everything in my head that would allow an inanimate body to move when the only answer hit me like a ton of putrid potatoes.

As soon as I realized this, the front door to Zombie Central opened and in walked the Zombie Queen herself.

Now that I’m awake, I know that I don’t recognize her face but in my dream, I knew who she was because, hello, I’m in her house.

I confronted her because, somehow, I knew she was a zombie. She asked me how I knew. I said it was because she was acting really strangely the last couple of days and that’s why I came by the house (so that’s what I was doing there…). She asked what gave her away. I said “Girl, you don’t use cheap make up but that crap you have plastered on your skin makes you look super unnatural. Besides. Since when do you drink BEER?!”

She sighed and admitted that she was infected with a virus that mutated (she didn’t tell me how she got it because you can be damn sure I’d stay far far away from The Source) a few days ago. This explained the greenish – grayish pallor to her face that cheap make up couldn’t cover. She was using drugstore stuff because it’s cheaper and she needed so much of it to sort of give her a human color again. She couldn’t explain the sudden taste for beer because she, like myself, never drank it but she had an insane craving for the yeasty stuff. It would appear that zombies like beer. Who knew. 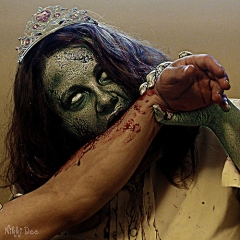 You know how there’s the bar that measures your life when you play games like Street Fighter and Mortal Kombat? There was one over her head but it counted from the outer edges in. When she walked in, the center portion of the bar was still yellow. I guess that represented her humanity. The outer corners were green. As we were talking about what happened to her, I watched as the purulent green finally overwhelmed the lonely, single yellow bar in the middle. At this point, the whole bar turned red and she gave a great shudder.

I asked her if she was going to kill me and she said that SHE won’t because we were friends. However, she can’t stop her children (that’s what she called the people she infected since she’s Patient Zero and thus the Queen of the Zombies) and they’re on their way. That was my cue to get the hell out.

But where do I go? What do I do? I have no super human powers to obliterate the literal walking dead. So I did the most obvious thing in the world. I went shopping. * note the heavy sense of sarcasm. I hate shopping malls. I have no idea why I went there. *

Next thing I know, Clyde (my boyfriend. Yes, in real life. No, that’s not his real name) and I are in the subterranean parking structure and I see a bunch of corpses and skeletons littering the parking stalls. Oh, dear God.

They suddenly start twitching and groaning. We break into the nearest car and I somehow managed to hot wire it. Thank God I paid attention to Angelina Jolie in “Gone In 60 Seconds”. As we drive away, the zombies give chase. We’re driving almost out of control up this spiral ramp thing trying to get outside when I get the genius idea to open my car door which would then shake this very persistent Hulk-ish looking zombie off my side of the door.

I obviously wasn’t thinking clearly because the second I opened the door, the vile creature shot his arm in and grabbed me.

OMFG, IT TOUCHED ME!!! I went completely berserk and slammed the door repeatedly on his arm which had the desired effect of him letting go of the car. Not satisfied, I ripped the car door off its hinges (BONNIE SMAAASSSSHHH!!!!!) and squished the offending zombie into the wall as we drove like stunt drivers up the ramp. I smelled burning zombie flesh. He was dead…uh….again.

I somehow magically replaced the door (God, I love dreams), reached over my driving boyfriend and punched a zombie in the face because I could see it was trying to bite him. I remember screaming “HANDS OFF, MOTHER F*CKER!!! THIS ONE’S MINE!! NO ONE’S BITING HIM UNLESS IT’S ME!!”

And then I woke up. The end.

Bonnie N. Clyde is a writer for YouBentMyWookie.com and the alias of the Supreme Commander / Ultimate Destroyer. She’s also secretly the Vampire Queen and together with the Zombie Queen they go clubbing and shoe shopping. You can find more of her musings over at MissBonnified.com.