We Are Zombie Nation

In a zombie infested world, it would probably be the only time in history where human females all over the world wouldn’t want to be sought out for their brains. 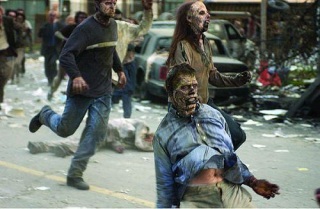 After a little vacation away from YBMW, I have returned!! I was trolling through the site when I noticed something very odd. There’s been a lot of pieces revolving around zombies. I personally prefer Vampires (this should be no secret by now) and even werewolves…but Zombies? Ugh, gross. Nothing about them appeals to me.

Can you imagine dating one? I can hear it now.

Hey, honey. Let me sing you a song. “Put your head on my shooouuulder”….oh sorry. It fell off. Hey, you smell really good! I can’t quite explain what it is. No, it’s not your new shampoo…or perfume….you smell delicious. Oh, I know what it is. It’s your brain. Mmmmm….braaains…..”

Date’s over. And now I’d also be a slobbering zombified thing with body parts falling off all over the place. No, thanks.

This isn’t including all the stupid one liners zombie men would tell their still human dates.

For example, “Hey girl. You look good enough to eat”.

Oh wait. Human males use this one too. My bad.

I once thought here could be nothing less offensive to the nose as Eau De Desparado but I take it back. Rotting, stinky undead coming for me because I harbor a fantastically yummy morsel known as my brain is not appealing. This would probably be the only time in history I could think of where human females all over the world wouldn’t want to be sought out for their brains.

The way I see it, the world would be dominated by the walking dead and blondes. Hey, just saying that all those dumb blond jokes might be what saves the human species as we know it.

Who knew hair the color of gold and the alleged puny brain size that comes with it could be our salvation? Forget John Conner and his terminating skills. We have Legally Blond to the rescue!

You know what the only thing a zombie has ever done for me? It got me to pick up “Pride and Prejudice”. I managed to put off reading the damn thing all throughout high school and never figured out what was so damn dreamy about Mr. Darcy. As you can tell, I never watched the movie either because I was worried I’d fall asleep. I should mention that the book I picked up was actually called “Pride and Prejudice and Zombies”.

I walked backwards a few steps to this curious display because the cover of the book caught my eye. I was like “Gruesome!! I love it. What is this about?” I nearly died laughing when I realized they had taken this classic and bastardized it in the most delicate way. I had to have it. I had to read it. I had to know how the hell this crazy ass author was going to weave in ZOMBIES into the story of Mr. Darcy and Elizabeth. It did the unthinkable. I read “Pride and Prejudice”….and loved every minute of it. So you know what that means. All manners of barnyard animals are flying over planetary bodies as we speak.

The reason I started thinking more about zombies was reading this. The Canadians have figured out a way to possibly fend off a zombie attack!!! Omfg, genius!!

This got me thinking (never a good thing). What if zombies really do exist? It only took a little while before I discovered something rather unsettling. Zombies do exist.

At this point, you only have cause to worry if you live in Thailand….and if you’re an ant. More specifically, a carpenter ant. According to a LiveScience article I pulled up from Yahoo called “Zombie Ants Controlled By Fungus”, it says “In a bizarre parasitic death sentence, a fungus turns carpenter ants into the walking dead and gets them to die in a spot that’s perfect for the fungus to grow and reproduce.”

That’s right. A fungus. How the hell freaking YEAST and MOLD manages to make an ant do it’s bidding is beyond me….and scientists. We’re unsure of what’s going on. That’s right. I said “we”. I’m lumping myself in with all these brainiacs because we both know the same thing – absolutely nothing.

They don’t know how the fungus gets the ants to completely override their ant behavior and I’m still scratching my head because I didn’t know fungi and molds have brains to do all this with….or do they??? Dun dun duuuuun….

But you know what’s even scarier? Scientists are actively trying to figure that out. Kind of makes me wonder what they’re planning on doing with that information and why they want to know. I think I better read that Canadian study again and start memorizing it. 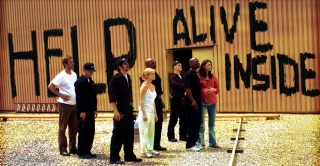 Bonnie N. Clyde is a writer for YouBentMyWookie.com and the alias of the Supreme Commander / Ultimate Destroyer. She also has a blog over at MissBonnified.com where you can read more of her musings and get to know why zombies are especially attracted to her big big brains.