Clone Your Own Unicorn With Magical Unicorn ‘Juice’!

“Unicorns were bred for their magic and keen night hunting skills to protect leprechauns that had been injured in battle during the civil war.” 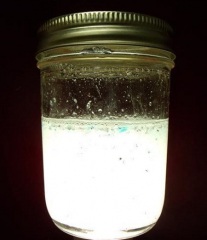 Ebay is the new flea market of the 21th century and like dirty shady flea markets, you can find just about anything for any price. Recently sold for $31, was the last jar of unicorn semen in the United States (assuming there are more jars of this magic elsewhere in the world).

Check out the user description from the auction:

“This is possibly the only jar of Unicorn semen left in the united states. Unicorns were bred for their magic and keen night hunting skills to protect leprechauns that had been injured in battle during the civil war. Unicorns were only found in two places on the planet, the northern and southern hemispheres. This specimen was squoozed only a week ago, and still has a warm salty feel to it. Anyone in possession of this rare and magical fluid will be able to swim with the wolves and fly with the dolphins as its powers are still being found.I opened the jar while i was on my computer and my computer flickered for a minute and i realized the semen had helped me kill Yogg-Saron on my World of Warcraft account and i received the Shawl of Haunted memories and the Mantle of the Wayward Conqueror. i have already been blessed and received my gift from this Mythical Jizz so i’m going to pass the power onto someone else. Just a few squirts of it in your hair will give you the glowing ora that only monogamously challenged strippers have under the blacklight.Do not drink the unicorn semen as the power is too much for the human digestive system and could change your DNA and give you the shits.” 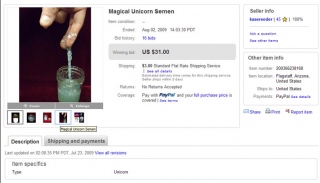