We’ve got a great prize for you this month. Two lucky YBMW readers will win their own copy of “Adjustment Bureau” staring Matt Damon and Emily Blunt on DVD.

We’ve got a great prize for you this month. Two lucky YBMW readers will win their own copy of “Adjustment Bureau” on DVD. The Matt Damon film that earned over $117 million dollars in the worldwide box office can be yours! This movie is exactly what you need. It’s the harrowing tale of a politician on the way up. However, unlike in the the real headlines, this one has a lot more to tackle than just some renegade underwear photos floating around the internet. He’s fighting against the hands of fate themselves! Just follow the instructions below: 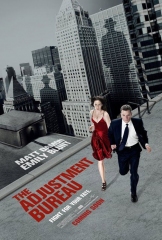 Two (2) winners will each receive:
– 1 Adjustment Bureau on DVD.

Here’s the official film synopsis:
On the brink of winning a U.S. Senate seat, charismatic politician David Norris (Matt Damon) meets Elise Sellas (Emily Blunt), a woman unlike any he’s ever known. As he realizes he’s falling madly in love with the beautiful, contemporary ballet dancer, strangers conspire to keep the two apart. David learns he is up against the men of the Adjustment Bureau, who will do everything in their considerable power to prevent the pair from spending the rest of their lives together. In the face of overwhelming odds, he must decide whether to accept his predetermined path and let her go…or defy Fate and risk everything to be with the woman he loves.

No purchase is necessary. The winner will be selected randomly from all valid and correct entries. The “Adjustment Bureau Blu-Ray” giveaway ends July 15th, 2011.