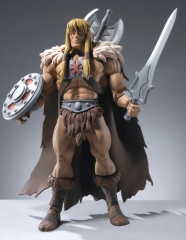 Here at Wookie we want to do more than just entertain and enlighten. We want to also give out cool prizes to the dedicated folks who support and contribute to our Wookie community. Our first contest is essentially a thank you to all those early adopters who’ve been with us since our launch and those who grew up on He-Man and the Masters of the Universe or any other awesome 80’s cartoon. 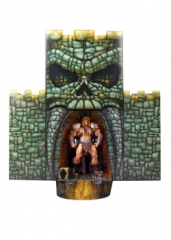 We will be giving away the 2008 SDCC ComicCon exclusive King Greyskull action figure. Sculpted by the Four Horsemen, King Greyskull was available only at the Mattel booth for those that were able to attend San Diego Comic Convention 2008. While it was eventually sold on Mattel’s own online collectors’ store, it has since sold out.

Like most Mattel SDCC exclusives, Mattel did an outstanding job with the King Greyskull package as it folds out into a mini Castle Greyskull! The drawbridge reveals the figure and comes equipped with flashing lights, thunder and the voice of Prince Adam/He-Man bolting out his infamous transformation battle cry.

You do you remember what Prince Adam would say when he wanted to turn into He-Man? If you do, you’re already half way to taking him home. Just fill out the contest form below with your contact info along with your answer. We’ll pick a winner on October, 31st.

CONTEST IS NOW CLOSED, WE WILL PICK A WINNER SOON.