YBMW and Relativity are teaming up to give one lucky reader a chance to win a “Season of the Witches” prize pack! 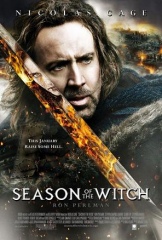 YBMW and Relativity are teaming up to give one lucky reader a chance to win a “Season of the Witch” prize pack that includes:

Directed by Dominic Sena, “Season of the Witch” is a period action film with supernatural elements.
The film stars Nicolas Cage and Ron Perlman as knights who return from the Crusades to find their homeland ruined by the Black Plague and a girl (Claire Foy) is being blamed for having caused the damage with her witchcraft.

“Season of the Witch” opens in theaters Nationwide on January 7th, 2011

For more information, check out the official “Season of the Witches” site.

No purchase is necessary. The winner will be selected randomly from all valid and correct entries. The “Season of the Witches” prize pack giveaway ends January 14th, 2011.

Question: Let us know which is your favorite Nicolas Cage film and why!