It’s been a long 30 years since “The Empire Strikes Back” first captured the imagination of movie audiences around the world. Now you can recapture that feeling with Topps’ new The Empire Strike Back 3D trading card series — the long awaited follow up to the coveted Star Wars 3D set from 1996.

Thanks to Topps, we have a few rare 3D promo card featuring Luke Skywalker to give out. This P1 promo card is available only to distributors and won’t be included in the retail set so you definitely don’t want to miss out! For those attending this year’s Wondercon in San Francisco, we’ll also be randomly giving a few away of these cards to attendees, no entry necessary!

The Empire Strike Back 3D trading card series presents a whole new look and experience for fans due to their cutting-edge 3D print technology (no glasses needed) and unique Widevision format matching the original size ratio of the theatrical release.

There are 24 packs per box with each pack containing 3 Empire Strikes Back 3D Widevision base cards.

You can expect Topps’ The Empire Strike Back 3D trading card series to hit retails this May 24. 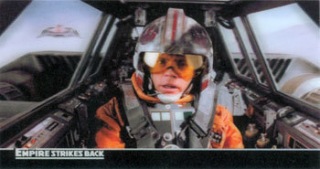 No purchase is necessary. Winners will be selected randomly from all valid and correct entries. The Empire Strike Back 3D trading card series giveaway ends April 25, 2010.

This Month’s Question: What Rebel Alliance vehicle is Luke is piloting in the promo card shown above? (Hint Snow_______?)