A contest featuring a slew of pop culture based collectibles valued at over $300. 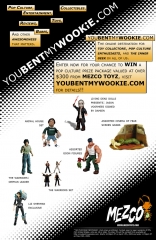 The Coolest Show on Earth, the FX International officially begins April 17 at the Orange County Convention Center in Orlando, Florida. To celebrate, we have an ultimate “FX” contest this month at YouBentMyWookie where one lucky reader will have the chance to win not just one prize but an entire action figure package lot!! Thanks to the awesome and generous folks over at Mezco Toyz, this contest will feature a whole slew of pop culture based collectible action figures valued at over $300:

This ultimate contest is open to all legal residents of fifty (50) United States and those who are 18+. One entry per person. No purchase is necessary. Winner will be selected randomly from all valid contest entries. Contest ends May 15, 2009.

But that’s not all… readers who attend this year’s FX International show will also have the chance to obtain a special code that can be found in the program’s guide allowing you to enter up to FIVE times!!

On a side note, winner of last month’s contest for a Dark Horse’s Vampire Hunter D PVC Collection will be announced later next week.