Enter now for your chance to win the special edition Blu-Ray of Spaceballs!

If you haven’t had a chance to check it out, head over to the interview that we just did with Michael Winslow about his time on the set of Spaceballs, check it out HERE. In honor of the 25th annivesary of ‘Spaceballs’ we are giving away a copy of the new Bluray release that is literally ozzing with extra features. See below for your chance to win this amazing release of a truly classic comedy.

Mel Brooks has made an epic career for himself spanning many decades and numerous genres. Brooks is an accomplished director, screenwriter, composer, lyricist, comedian, actor and producer, and here we will highlight some of our favorite movies, musicals and TV shows that have come from this comic genius.

When the evil Dark Helmet (Rick Moranis) attempts to steal all the air from planet Druidia, a determined Druish Princess (Daphne Zuniga), a clueless rogue (Bill Pullman) and a half-man/half-dog creature who’s his own best friend (John Candy) set out to stop him. But with the forces of darkness closing in on them at ludicrous speed, they’ll need the help of a wise imp named Yogurt (Mel Brooks) and the mystical power of “The Schwartz” to bring peace and merchandising rights to the entire galaxy! 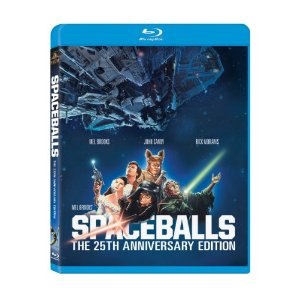 Here’s how it works:
1. You can enter once a day to win the featured prize.
3. Answer the “Question of The Day”
4. Be sure to follow us on Facebook and/or Twitter @youbentmywookie and RT: “Win The Spaceballs 25th Anniversary Blu-Ray at YBMW! http://bit.ly/NAVcaZ”

Contest Question: What type of Jam Jammed the radar?

Mel Brooks co-created the hilarious television show Get Smart, which ran from 1965 to 1970. Brooks described the show as, “an insane combination of James Bond and Mel Brooks comedy.” The show centered on Maxwell Smart, a secret agent, and his female partner, Agent 99. Get Smart is memorable for many reasons, including it’s hilarious take on Bond-style gadgets (Smart’s famous “shoe phone”), and the fact that Agent 99 was the first woman on an American sitcom to keep her job after marriage and motherhood. To date, this is the only Mel Brooks production to feature a laugh track.

1974’s Blazing Saddles saw Brooks take on numerous hats – writer, director and actor! This satire of Hollywood westerns stars Cleavon Little and Gene Wilder. The film lampoons the racism perpetuated by Hollywood’s take on the American West. The film is full of (hilarious) deliberate anachronisms, and the plot spoofs countless western clichés. Blazing Saddles is consistently included on numerous “best of” lists, and was nominated for three Oscars in 1975.

History of the World, Part 1

1981’s History of the World, Part 1 again sees Brooks playing many roles – both behind the camera and on screen. Brooks serves as a writer, producer, director and stars in the film playing five separate roles! The film tells a comic version of the dawn of man, the Old Testament, the Roman Empire, the Spanish Inquisition and the French Revolution. Despite previewing some faux “coming attractions” (including “Hitler on Ice” and “Jews in Space”), no sequel has ever been made. The phrase, “It’s good to be the king” also originated in this film and has since become a favourite catchphrase in pop culture.

The live musical adaptation of The Producers (based on Brooks’ movie of the same title from 1968) opened on Broadway in 2001. The Producers originally stared Nathan Lane and Matthew Broderick as Max Bialystock (a down on his luck Broadway producer) and Leo Bloom (a mild mannered accountant), respectively. Unlike the show within the show, The Producers was a huge smash hit, winning a record-breaking 12 Tony Awards, many international and domestic tours and a successful film adaptation in 2005.

The 2008 show Spaceballs: The Animated Series was loosely based on the film of the same name. Each episode set out to parody a different film of aspect of pop culture, like The Lord of the Rings trilogy and the Grand Theft Auto video games. Mel Brooks, Dahpne Zuniga and Joan Rivers all returned to voice their original Spaceballs characters. Though the show was only 13 episodes, it gave Spaceballs fans a chance to revisit some of their favorite characters and here them satirize a new decade.