We sat down with Michael Winslow to talk about the 25th Anniversary of the Mel Brooks classic ‘Spaceballs’ and how his trademark sound has made him a pop culture icon.

Chucking Dice gets an exclusive interview with Michael Winslow in honor of the release of the ‘Spaceballs’ 25th Anniversary Blu Ray Release
*Be sure to check out the link at the bottom of this interview to enter our contest for your chance to win your own copy of the Blu Ray!

YBMW: First off, I’d like to thank you for taking the time to talk to us. I’ve been an enormous fan of yours since the first Police Academy film and I’m truly delighted to have this opportunity to ask you about your personal experience on one of my favorite films, Spaceballs.

You’ve had a distinctive presence in motion pictures, whether it was on screen in the Police Academy series as Larvelle Jones, or behind the scenes as the voice of some of the Mogwais in Gremlins. When you first appeared in the film Spaceballs, it was a pleasant surprise to see a recognizable face. How did you first get involved with the project?

Michael Winslow: It was one of those out of the blue contacts. Police Academy was now working it’s magic in box office and great hype, when I get this call that Mel Brooks was working on some kind of secret project about space. I was kind of thrown in there originally for just a couple of days. Lucky for me, that turned into 2 weeks work. Too bad you can’t see the stuff the studio cutting room floor.

YBMW: As the Radar Technician, it’s clear that the role was custom made for your talents. Had you not been available, the scene wouldn’t have worked, or not have existed at all. Was there an extent that you were involved in creating that scene? If so, how did that collaboration work for that segment.

Michael Winslow: Improvisation was the rule of the day on that Film. If a line didn’t work, we would attack it head on and create something else. If the writers couldn’t come up with it in reasonable time, Mel and cast would hash it out in real time. There’s no time to wait when it comes to comedy timing. 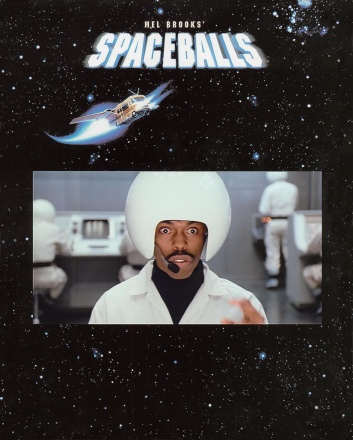 YBMW: Through the ages, we’ve gotten numerous ‘Star Wars’ renditions; Star Crash, Battle Beyond the Stars, the Last Starfighter, etc. Spaceballs was the first official science fiction parody that took on the production side of this film extremely seriously. The interior sets of Spaceball-One have more production value than a good majority of the Star Wars imitators. In some cases, they could’ve existed in the actual movies George Lucas produced (Mr. Coffee machine not withstanding). What was it like to work on a production that size?

Michael Winslow: The MGM Sound stages at the time in Culver City California were very grand indeed. In fact, below the floor of the stage we were on had the giant water pool from the 30’s and 40’s that those swimming water scenes were shot from all of those countless musicals starring Fred Astaire and Gene Kelly and too many more to mention. That tank also doubled as a gimbal stage for sea and storm shots for something like say, a “Cape Fear” type of set up. Yes, we were aware of the history around us.

YBMW: Mel Brook’s has been a legend in creating motion picture comedies. His track record was established well before Spaceballs. Having an opportunity to work with him was probably like being invited to jam with the band Led Zeppelin. How did it feel to be asked to work with Mel Brook’s on what would soon become another one of his classic films?

Michael Winslow: I made sure not to think about it during production. That will distract you, and your performance. I took it as going to graduate school, and I had better pay attention, learn and listen, because these folks are masters of the craft.

YBMW: No one ever talks about the dreadful time they had while working on a Mel Brook’s film, everyone has a story on how much fun it was working on one of his pictures. Was it a fun set? Are there any stories you could share of what might have happened in between the camera rolls?

Michael Winslow: I have no memory of anything dreadful occurring. I do recall hearing about Mel getting one of those annoying studio messages that they were behind schedule and he should eliminate some pages to keep on time with the production schedule. His response was to grab several pages and tearing them literally out of the script, throwing them in the air and saying there ya go, anything else? And of course, the young red faced still green exec ran out of there with his tail in a nice gift box.

YBMW: You were on set with Rick Moranis who is currently retired from acting in movies and tv shows. There were rumors that he may come out of his hiatus and return for the next Ghostbusters film. Unfortunately, that remains to be seen if he decides to come back. Being one of the privileged few who has worked with Mr. Moranis, in the prime of his career, what was it like to perform opposite him on the set of Spaceballs?

Michael Winslow: If I am not mistaken, I believe that he was working on his Director’s Guild Certification on that film and Mel was helping him get that status. He was very cool and worked with Mel on every shot I saw, both very dynamic and professional. Great chemistry.

YBMW: ‘Spaceballs’ has close relations to ‘Star Wars’. One thing that the fandom has done with the first and second trilogy was to create an expanded universe of every single character in that world. Being an actual performer in ‘Spaceballs’, what do you think was the name of your character, and what might have happened to him after the destruction of Spaceball-One? I’m assuming the Radar Technician got away because there were only three people stranded in the craft at the time.

YBMW: Tell us about life after ‘Spaceballs’. Do you have any upcoming projects in the horizon?

Michael Winslow: ‘Police Academy 8’ is in preproduction right now through New Line Cinema, and I do have my own production on deck. I am in the thick of the Edinburgh Fringe festival in Scotland, one of the world’s biggest comedy music festivals. There is a new video game I am involved in on iTunes called Wizard Opps, the entire game is human voice generated, and for more specific events, just check out michaelwinslow.net, and michaelwinslowtv on Youtube. we will be building those up in the months to come.

YBMW: Finally, this isn’t Spaceballs related, but it’s something I’ve been wondering for years since I saw the first Police Academy film. During one of the scenes of the first film, where G.W. Bailey (as Lt. Harris) is walking through the hallways and checking on the slumbering cadets, he stops at Larvelle’s room , and he is playing a video game in his head. My friend and I were always speculated on what kind of video game you were visualizing. He thought it was a riff on skeet shooting, but I thought it had to do with an alien invasion. Is it possible to get it from the artist’s mouth on what were the mechanics of that video game?

Michael Winslow: That was all improv. At the time, games of today’s sophistication did not exist. The heavy player of the time was Atari and I pretty much did a wishful approximation of a kitchen sink approach, a little of everything to date.

YBMW: Once again, thank you for taking the time to answer these questions. Humor is the best weapon against cynicism. I can honestly say that because of the performances that
you’ve done back in the countless televisions series and motion pictures have helped me see
the lighter side of life, and not drown myself in negativity. There have been some real tough
times lately, and its people such as yourself that help guide us to the light at the end of the
tunnel. I’m eternally grateful for all you’ve done to make my journey in life a much happier trek.

Michael Winslow: Thanks again for reminding me how much we have learned from Mel Brooks, George Lucas, and all that inspire us.