It looks like Kick Ass 2 is finally going to happen and it might even start filming in a few months!

It looks like Kick Ass 2 is finally going to happen and it might even start filming in a few months! At least that is the word that came down earlier today from Universal studios who is now in talks to make the film with Jeff Wadlow as director.

The sad news is that is that Matthew Vaughn will not be returning to the franchise, but at least we know his talents are being put to good use over on the X-Men Films. Word is, though, that he will at least still be producing the film.

Wadlow is the one who wrote the sequel script for Vaughn, so it is not totally out of the realm of reason that he direct it. His other credits include 2005’s Cry_Wolf and 2008’s Never Back Down.

Talks have also begun with cast members Aaron Johnson, Chloe Moretz, and Christopher Mintz-Plasse to return, and the movie should begin production in August.

The basic plot for the sequel involves Kick-Ass and Hit-Girl gathering up a group of heroes against Red Mist’s gang of villains. At least that is what happened in the comics. 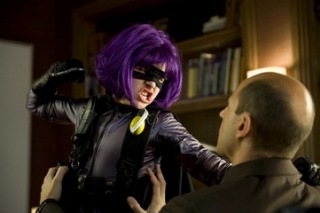