Yikes, I think it might be time to change the name of that game to Horrified, Horrified Hippos.

There’s not really a lot for me to say about this video. It was created by Ian Robertson and it is one of the single most violent music videos that I’ve seen towards board games that I’ve ever seen. No game is safe, from Battle Ship to Hungry, Hungry Hippos. Even Rubik’s Cubes and Jenga can’t hide from the carnage as they are all hacked to bits with a cleaver and then turned into a paste to create a new album. 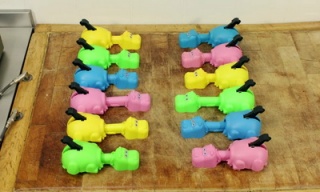