Fans rejoiced when Lucifer was saved from cancellation on FOX by Netflix.

Fans rejoiced when Lucifer was saved from cancellation on FOX by Netflix. Today, TVLine released what we think is the first official image from the new season in which Lucifer and this year’s main antagonist – Eve. Show star, Tom Ellis, sat down with TvLine and talked to them a bit about how the new character will affect him on the show.

“Lucifer is in a very vulnerable moment, emotionally — not that he would ever recognize that — when out of nowhere, Eve turns up, and brings back so much for Lucifer, about the man he used to be — or, the Devil he used to be. She’s never forgotten about him. And she loves him.”

As to what effect Eve, played by Inbar Lavi will have on the events of the big, cliff-hanger reveal at the end of season three remains to be seen. 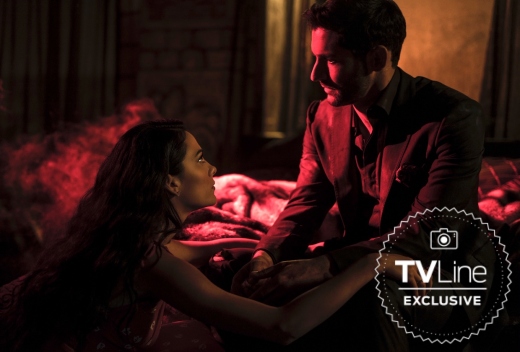