Take-Two, the developes of MLB 2k10 is offering a million to the first person, who can pitch a perfect game. 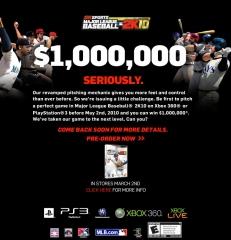 Your mom may have told you that you’d never amount to anything playing video games all day. But if you happen to win 2k Sports’ MLB 2k10 million-dollar giveaway, you best expect her to be begging you for some of that change.

Two stipulations exist of course for your once in a life time shot at one million dollars: You have to play against the CPU in MLB Today mode, where it will automatically default to all of the proper game play settings; and you have to record yourself pitching the entire perfect game and put it onto a DVD.

Personally I’ve never been a fan of the MLB 2k series. Having own MLB 2k9 and logging in all about six hours of total play time, I can attest that it’s one of the worse baseball games I’ve ever played. 2K10 promises a lot of change, so I guess only time will tell. If the game tanks and the critics bash it yet again, not even a two million dollar prize is going to move this game off store shelves.