A New Buffy The Vampire Slayer Movie? It Could Happen!

Is this just a fan’s wet dream, or is there some reality to the story? 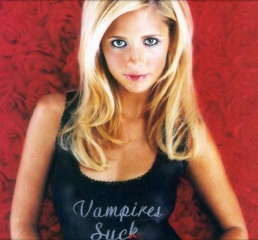 At the site of that headline, thousands of Buffy the Vampire Slayer fans may very well have just wet themselves. As far as anyone was concerned, the series was pretty much over with the exception of the great comic series that Whedon is helming over at Dark Horse.

Well, while we were all gorging ourselves on turkey… or my case, delicious lamb (thanks mom), The world around us was still spinning. All the way over in Australia where they call pencil erasers rubbers and the toilets flush the wrong way, The Herald Sun had this little new line:

The monster success of girly vampire pic Twilight at the US Box office last weekend could kick open the door for a big-screen return of Joss Whedon’s much-loved Buffy the Vampire Slayer. Rumours are circulating in Hollywood that Whedon has a feature-film script based on his hit TV series ready to roll as soon as a studio is prepared to commit. The Buffy concept was first unveiled as a movie in 1992 with long-forgotten Kristy Swanson in the title role.

Sarah Michelle Gellar and David Boreanaz have always said they wouldn’t care so much to do any more small-screen Buffy/Angel but would jump at the chance to bring the characters to theaters. So what do you think? Is this just a fan’s wish? Or is there some reality to the story?