“The images shown during the end credits of the ‘Lost’ finale, which included shots of Oceanic 815 on a deserted beach, were not part of the final story…”

ABC wants to set the record straight over the series finale plane crash images that showed up after the “Lost” logo appeared and the credits rolled. They are not what some are claiming online as Easter egg clues concluding that no one survived the crash of Oceanic 815’s and that everything we saw in the last six years never occurred.

Those photographs were not part of the “Lost” story at all an ABC spokesperson wrote in an e-mail Tuesday. According to ABC, they were added to soften the transition from the moving ending of the series to the 11 p.m. news and never indented to confuse viewers.

“The images shown during the end credits of the ‘Lost’ finale, which included shots of Oceanic 815 on a deserted beach, were not part of the final story but were a visual aid to allow the viewer to decompress before heading into the news.”

What this means is that the ending between Jack and Christian Shepherd still stands and it is still very open for interpretation. Yes, there are still several unanswered questions, but what happened on the island did occur. Some survivors did manage to leave the island, and the sideways flash is really an after-life or moment before the gates of Heaven. In the end everyone was able to meet up with each other due to their bond and experiences on the island and together they all move on to the next step in their afterlife. 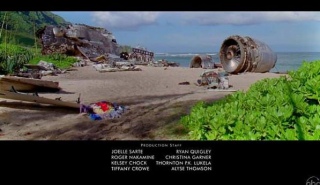