Today at WonderCon Marvel announced that Adrian Pasdar and Milo Ventamiglia will be voicing the Iron Man and Wolverine Anime style Toons set to hit G4 this summer!

Playing Tony stark will be Adrian Pasdar and filling in the role of Logan/Wolverine will be Milo Ventamiglia. If the grouping sounds a bit too familiar, the pair previously played brothers on the now defunct ‘Heroes’ on NBC. The shows will be premiering this July on G4. Check below for images and the official release.

San Francisco, April 2, 2011 – Marvel’s Head of Television Jeph Loeb announced casting for two of the company’s much anticipated anime series, IRON MAN and WOLVERINE, at its WonderCon panel today in San Francisco to the delight of fans in attendance. Both series will premiere on G4 in July 2011.

Adrian Pasdar (Heroes, Castle, Profit) will lend his voice to the character of Tony Stark in IRON MAN, an all-new series which sees Stark travel to Japan and battle the evil Zodiac Organization.

“Adrian and Milo are perfect as Iron Man and Wolverine,” said Loeb. “It’s extremely exciting to see these talented guys take on two of the most iconic Super Hero roles of all time.”

As the exclusive US TV home for the series, G4 will air IRON MAN and WOLVERINE along with the BLADE and X-MEN anime series later this year. The network will premiere an exclusive clip from WOLVERINE on Wednesday’s Attack of the Show at 7 pm ET/PT. 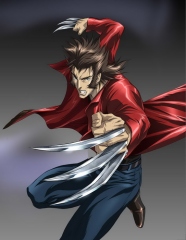