Alfonso Ribeiro Busts Out “The Carlton” On DANCING WITH THE STARS

Check out His perfect score “Carlton” from last night and then check out his classic 1980’s Pepsi commercial dance with Michael Jackson.

I don’t think we’ve written a single post about ABC’s Dancing With The Stars since Steve Wozniak was a contestant, but last night’s big event is definitely worth checking out. Fresh Prince of Bel-Air star, Alfonso Ribeiro finally busted out his signature move “The Carlton” during his Jazz dance with partner, Witney Carson. The pair did so well that they earned a standing ovation from the audience and a perfect score of forty from the judges.

I have to say, including him Ribiero in the competition didn’t seem quite fair to me at first. Most people don’t remember this now, but he’s got a history as a dancer. When I was a little kid, he appeared in a Pepsi commercial with Michael Jackson where the two danced together. Check it out below. In case you can’t recognize him, he’s mini Michael in the white glove and red jacket. 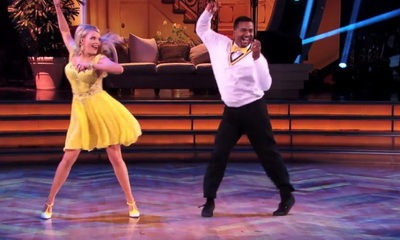