Check out this amazing video of Chris Evans Kicking the butts of some alien baddies in his Captain America costume.

We’ve been seeing leaked footage from the set of The Dark Knight Rises for a few weeks now, but DC can’t have all the fun. Now footage is starting to fly onto the net from the Cleavland shoots of The Avengers. Below we’ve got some great video of Chris Evans as Captain America, kicking the asses of a couple baddies. We’ve also got some close up photos of the fight that show the weaponry that the bad guys are sporting. As far as their costumes go, it looks like they might be motion capture outfits, so I would not be surprised to see them either in CGI outfits or completely replaced by a CGI creature… like a Skrull.

On a side note, I’m starting to feel kind of weird about all this footage that has been leaking onto the net from the sets of movies lately. Part of me feels like studios are going to start going back to sound stages more because they can’t seem to keep any of the movie secret. I don’t really care either way about spoilers, but part of me can’t help but feel that we lose some of the movie magic by watching every step of the production as it happens. Then again, I still completely geek out when I see footage like the video below or what we’ve been seeing from the new Batman movie. 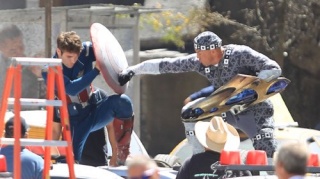