Andrew Garfield recently spoke to press about the tone of the reboot and shared his first reaction to seeing the picture of himself in the new Spider-Man costume.

“It’s cool right? That’s cool man! I’m not going to lie, I’m kind of excited by that! It’s ridiculous and surreal…I’m really kind of humbled by it.”

As for the tone of the reboot, we’ll just have “to wait a year and a half to find out.”

In other news, the first fully costumed Spider-Man image has been revealed on a Los Angelas set. It’s not the greatest image, it’s tiny and it’s blurry as hell, but it’s Spider-Man with his mask!

The image is from the film set on Grand Ave, outside the Museum of Contemporary Art, in Los Angeles. It’s hard to make out whether this is Andrew Garfield or a stunt man, but it doesn’t really matter does it? It’s Spider-Man!! 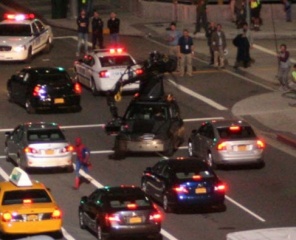