When studio execs saw the upcoming two-episode arc of Arrow that introduces Barry Allen, they were so impressed that they decided to give him his own trailer instead of introducing him in full Flash costume ten episodes down the line. Now, we are going to finally see what all the fuss is about starting this Wednesday night.

Check out this clip of his first interaction with Oliver Queen:

BARRY ALLEN COMES TO STARLING CITY — A seemingly impossible robbery at Queen Consolidated’s Applied Sciences Division brings Central City police scientist Barry Allen (guest star Grant Gustin) to town. Citing a similar case back home, Barry offers to help Oliver (Stephen Amell) and team with the investigation. Oliver senses there is more to Barry than meets the eye, but he’s distracted by the similarities between this current case and something that happened on the island. Meanwhile, Felicity (Emily Bett Rickards) takes a liking to Barry, which doesn’t go unnoticed by Oliver. Sin (guest star Bex Taylor-Klaus) asks Roy (Colton Haynes) for help when a friend of hers goes missing. Roy is surprised when Thea (Willa Holland) not only encourages him to help, but joins the search. Unfortunately, Sin’s friend is connected to Brother Blood (guest star Kevin Alejandro), and their search ultimately gets one of them seriously injured. 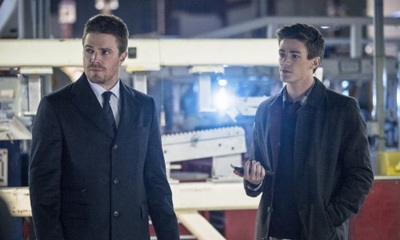