“One of the things that most excites us about Arrow is that we go where the story takes us. Last year, the story took us to the tragic death of Laurel Lance.”

When Katie Cassidy’s Laurel Lance met her end on Arrow last season, the powers that be weren’t ready to let her go. Thanks to the Multi-Verse, she lives on as her own evil doppelganger version of The Black Canary. We’ve already seen her make her mark on Earth 1 with her return to Star City, and it has also been announced that she’ll have some role in the final two episodes of the season. However, we now know that she’s been upgraded back to regular cast for Season 6.

What does this mean? I have no idea. Maybe Ollie will succeed and reform her, or maybe she’ll start her own team of villainesses that will serve as the big bad for next season. Moreover, what does this mean for Dinah Drake? Is her time as the new Black Canary running out already? Time will only tell. Until then, you can at least chew on executive producer Marc Guggenheim’s official statement:

“One of the things that most excites us about Arrow is that we go where the story takes us. Last year, the story took us to the tragic death of Laurel Lance. This year, our midseason finale reintroduced us to Laurel’s doppelgänger, Black Siren. We were so taken by Katie’s fearless interpretation of this character that we knew her story was not yet finished. We couldn’t be more thrilled to welcome Katie back to Arrow as Black Siren, though as her appearances on Arrow and DC’s Legends of Tomorrow this season show, she never really left the family.” 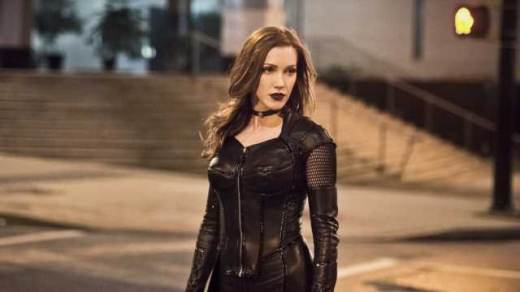